Pope arrives in UK with strong words on abuse 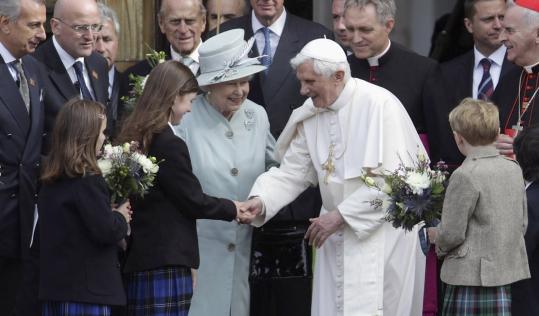 GLASGOW — Pope Benedict XVI arrived yesterday in Scotland, offering his strongest criticism yet of the Roman Catholic Church’s handling of the sex abuse crisis, saying church leaders had not been “sufficiently vigilant’’ or “sufficiently swift and decisive’’ in cracking down on abusers.

While Benedict was received graciously by Queen Elizabeth II in Edinburgh and thousands turned out for an open-air Mass in Glasgow, the visit was taking place under the dark shadow of the sex abuse scandals, which have shaken even the faithful in nearby Ireland, in his native Germany and elsewhere in Europe.

Protests were planned by atheists and gay and human rights activists incensed by the pope’s handling of the scandals and by others opposed to the church’s stance on social issues. Centuries after the Church of England split from Rome, some Anglicans are wary of the Vatican’s recent efforts to draw traditionalists to Roman Catholicism. That the occasion for the visit is the beatification of Cardinal John Henry Newman, England’s most famous Catholic convert, has only added to their suspicions.

Ahead of the pope’s four-day visit, one of Britain’s most prominent Catholic leaders spoke about the wounds left by the church’s failures in the abuse cases.

“The church has made a mess of its response to incidences of child abuse,’’ said Archbishop Vincent Nichols, the head of the Roman Catholic Church in England and Wales. “There is nothing to be said to excuse the crimes committed by members of the clergy against children. The damage that is done strikes at the core of the person: in the capacity to trust another, in their capacity to love another, and — especially in the context of the church — in their capacity to believe in God.’’

Perhaps mindful of such criticism, Benedict told reporters on his flight from Rome that the church’s “first interest is the victims’’ of abuse, and that the church needed to ask, “How can we repair, what can we do to help them to overcome the trauma, to refind their lives?’’

Responding in Italian to reporters’ questions submitted in advance and relayed to him by Vatican officials, the pope’s words marked an evolution in the Vatican’s response. In the heat of the crisis last spring, top Vatican officials at first blamed the news media for stirring it up.

Critics quickly pounced on the statement, calling it evasive and out of touch. In a statement, the United States-based group Bishopaccountability.org, which tracks abuse cases, said the pontiff’s words “ring hollow,’’ adding that he had said similar things for years with little action.

“In researching this crisis for seven years, we have not found one documented instance before 2002 of a top church official contacting civil authorities to report an allegation of sexual abuse,’’ the group said.

Benedict’s visit to Britain comes as part of his sustained effort to counter a perceived loss of religious belief in Europe and to urge a new struggle against secularism.

Benedict’s is the first state visit to Britain by a pope in which he is meeting the queen and political establishment as a fellow head of state. In 1982, John Paul II paid a pastoral visit to Britain, but did not meet Prime Minister Margaret Thatcher and was received by the queen privately.

Today, Benedict is expected to meet with the archbishop of Canterbury, Rowan Williams, and the two will participate in a rare ecumenical service in Westminster Abbey, where the pope is expected to deliver the central speech of his visit.