The spies who shunned me

For two weeks, David Filipov was our man in Moscow again, assigned to track down the Russian spies who infiltrated Cambridge before they were arrested and sent home last month. He came up empty but with a story to tell about how secrecy remains the unchecked sovereign of this otherwise much-changed land. 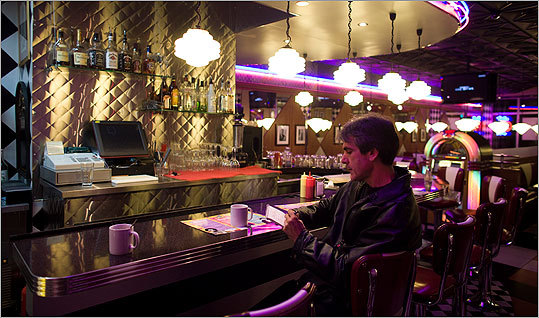 David Filipov took notes at the Beverly Hills Diner in Moscow at 3 a.m. on a Sunday morning. (Mikhail Galustov for The Boston Globe)
By David Filipov Globe Staff / August 29, 2010

MOSCOW — “Mission Impossible’’ had nothing on this.

I was walking down a quiet road that runs through birch and maple woods just outside the Russian capital. Occasionally, black sedans with flashing blue lights whizzed by. Ahead, stern men in light blue shirts stood guard at a checkpoint. Beyond them was the most secretive of places: headquarters of the Russian Foreign Intelligence Service, a.k.a “The Forest.’’

My assignment was to find and interview Andrei Bezrukov and Elena Vavilova, the confessed Russian spies who lived secret lives in Cambridge before they were deported from the United States with eight other admitted agents last month. Soon after they arrived in Moscow, they most likely rode down this road. As intelligence officers for the former KGB, they probably trained or worked here. No doubt the orders that led them to take up residence on Trowbridge Street under the assumed identities of Donald Howard Heathfield and Tracey Lee Ann Foley were issued here. For them, going through that checkpoint was a kind of homecoming.

For me, going up to that checkpoint was a really dumb idea.

Don’t poke around too much, a former Russian intelligence officer had warned me. “They keep track of anyone who shows up.’’

But I was desperate. This was the last place anyone had seen Bezrukov and Vavilova before they disappeared from the public eye soon after arriving in Moscow. And in two weeks of searching, I had gotten nowhere.

So it made sense to just walk up and knock on the door of Spy Central, right?

Wrong. Before those guards spied me, I got cold feet and split.

I was looking for spies in a country run by former spooks, who believe in secrecy and state control over everything. Last weekend, they had an opposition leader arrested for carrying a Russian flag on Russian Flag Day. They may soon allow counterintelligence agents to question anyone they think might commit a crime. They still feel the need to send people like Bezrukov and Vavilova to spy on us, and they assume we spy on them. An American snooping around here could get in real trouble.

“The secret of where the spies are is just as holy to Russian intelligence as the secret why the holy fire burns every Easter in Israel is to Christian priests,’’ mused Vladimir Rubanov, a retired three-star KGB general whom I met at a trendy Italian restaurant soon after my arrival. “You won’t find them.’’

But I had to start somewhere.

In Boston, when I need to find someone, I might check the phone book. Bezrukov, Andrei . . . how many can there be? Problem is, they do not have phone books in Russia. Never have.

Don’t get me wrong: Much has changed since my 10-year stint as the Globe’s Moscow correspondent ended in 2004. The capital has more Wi-Fi cafes and sushi bars per city block than any place I’ve been. It is open 24 hours: You can eat, drink, party, shop, or buy a whenever you want. They have 4G mobile Internet. You can log on to the Web on your smartphone in the Moscow metro, 200 feet underground, and “Russian spy Elena Vavilova.’’

But there is no obvious way to find someone the government wants to keep hidden.

When the Trowbridge twosome returned to Russia, the intelligence service spirited them and the other eight spies to a “guest house’’ in the woods in the southern Moscow suburb of Yasenovo. There are no visiting hours for nosy Americans though, and you could not call them even if you knew the number. Cellphones have no coverage there.

Spy agencies everywhere are secretive. It is not as though you could go to the CIA and demand to see their spies. But Russia could be the set of “Secretive Spies Gone Wild.’’ Russian intelligence agencies recently refused an order from President Dmitry Medvedev to disclose their salaries — because they were too secret. Legislators cannot debate whether the recently unraveled spy mission was a waste of money — because the intelligence budget is a secret.

This is the world to which Bezrukov, Vavilova, and their sons, Tim and Alex Foley, have come. The question was, where did they go?

Rubanov, who made waves — and enemies — in the late 1980s by arguing that not everything about the security agencies should be a secret, suggested I check out an apartment building on Malaya Dmitrovka Street in central Moscow. Retired “rezidenty’’ — spies who used diplomatic cover at overseas embassies — live there.

It had a remote-controlled gate. I pressed a buzzer. “Yes?’’ came a voice on an intercom. I mumbled something about forgetting the code to my grandfather’s apartment. The gate opened.

As Moscow high-rises go, it is not a bad place. It has run-down stairwells, but so do lots of buildings here. Some of the apartments have been renovated. A store in the basement sells antique religious icons — prices start at $1,000. It does not hold a candle to the gray-shingled townhouse Bezrukov and Vavilova owned on Trowbridge Street. And on the secret salary they will probably receive if they continue working for the intelligence service, (which secretive spy sources tell me is a little over $2,000 a month), they will never be able to afford it. A two-room apartment here costs more than $500,000.

I stopped a silver-haired man in a gray suit who looked like he might live in the building.

Awkward. My cellphone rang. It was a good excuse to leave.

Bezrukov and Vavilova went to Cambridge from Canada a decade ago. They may have spent nearly as much time setting up their identities in Canada, some intelligence officers believe — especially given the likelihood that Alex Foley, 16 at the time of their arrest, was born in North America.

That suggests they enlisted in the KGB in the 1980s, when foreign intelligence was a prestigious job, with good pay, decent housing, and access to special stores and services. Intelligence officers were allowed to travel to places most Soviet citizens could not go. Working overseas meant being able to buy consumer goods most Soviets could only dream about.

And now? Soon after the Cambridge spies and their comrades returned to Russia, Prime Minister Vladimir Putin — a former KGB colonel — promised them “a bright future.’’

Whom better to ask about that future than Kirill Kabanov, a former KGB officer who now heads a nonprofit anticorruption watchdog that tracks how former spooks migrate into the world of what he calls “bandit capitalism.’’

He thinks agents whose cover has been blown have a different future.

“They can no longer work overseas, so they are no longer needed,’’ Kabanov said in his office, where he keeps a thick file — titled “Scoundrels’’ — full of corruption cases. “I doubt they will get cars, villas, and houses. They will not be able to afford the clothes they were wearing. . . . They will be a little disappointed with Russian society.’’

One possible job for Bezrukov and Vavilova, Kabanov said, was at a military language school in northwest Moscow. He did not want to say the address out loud, because it is a secret, so he promised to send it as a text message. He did not.

Next I tried a guy who turned his intelligence agency past into a career in business. Alexei Kondaurov was a KGB general, then rode to the top of the mammoth oil company Yukos before the state imprisoned its chief executive, Mikhail Khodorkovsky, on corruption charges. Kondaurov left the company and joined the opposition to Putin.

“They probably think today’s Russia is something similar to the West,’’ he said of Bezrukov and Vavilova. “The level of democratic freedoms, the level of freedom of press, the lack of democracy, the level of corruption — it will be a shock.’’

Looking for more specifics, I turned to Andrei Soldatov, coauthor of “The New Nobility: The Restoration of Russia’s Security State and the Enduring Legacy of the KGB.’’ At a meeting over cappuccinos at a Wi-Fi cafe, Soldatov suggested that the Cambridge couple might end up where they began their careers: at the “School in the Forest.’’

That is the nickname for the secretive academy run by the Foreign Intelligence Service. Its location is not really a secret — mushroom pickers stumble upon it all the time. But it is disguised on maps as children’s camps and research institutes.

Soldatov recounted the story of a former student who decided upon graduation not to go into the service. He asked for his diploma. His request was denied.

“The diploma was a state secret,’’ Soldatov explained.

Interesting stuff. But I was running out of time to find Bezrukov and Vavilova. Desperate, I hit the nightclubs. I wandered the streets.

I finally went to one Foreign Intelligence Service joint that is not a state secret: its press center. The opulent neoclassical building sits at the end of a central Moscow street studded with trendy restaurants and fancy stores.

I talked my way past an iron gate, and a couple of severe-but-friendly guards, into an ornate waiting hall, where I met Sergei Ivanov, the genial-but-businesslike spokesman of the service. Asked about the fate of the Cambridge spies, Ivanov’s demeanor did not change.

“We don’t have anything to say,’’ he said. “You understand that some things are secret.’’

Globe correspondent Mikhail Galustov contributed to this report. David Filipov can be reached at filipov@globe.com.