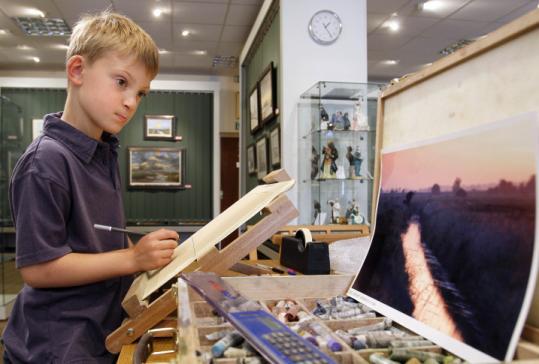 It has all happened so quickly — he’s still getting used to the spotlight — and Kieron Williamson fidgets a little when he’s asked to share his thoughts on art.

“Cows are the easiest thing to paint,’’ said Kieron, who has just turned 8. “You don’t have to worry about doing so much detail.’’

Paintbrush prodigy Kieron — dubbed “mini Monet’’ by the British press — is a trans-Atlantic sensation. All 33 of the pastels, watercolors, and oil paintings in his latest exhibition sold, within half an hour, for a total of 150,000 pounds ($235,000). Buyers from as far away as the United States lined up overnight outside the gallery, and there is a 3,000-strong waiting list for his Impressionistic landscapes of boat-dotted estuaries, snowy fields, and wide marshland skies.

Kieron shrugs off the attention. “It feels normal to me,’’ he said.

It definitely doesn’t feel normal to his parents, Keith and Michelle Williamson. They are bemused, proud, and a little anxious about their son’s talent and its effects.

“It has been overwhelming,’’ said Michelle Williamson, a 37-year-old nutritional therapist. She and her 44-year-old art dealer husband live in a small apartment with Kieron and his 6-year-old sister, Billie-Jo.

Kieron was a normal, energetic little boy, and his parents were surprised when he asked for pencils and paper during a holiday in Cornwall two years ago. They were astonished when the then-5-year-old produced an accomplished picture of boats in a harbor. He progressed rapidly to fully realized landscapes, many depicting the flat, open Norfolk countryside near their home.

“We don’t understand it. We don’t know where it comes from,’’ his mother said. “But he’s adamant it’s what he wants to do. When your child has got such a gift and a talent, you have to support him.’’

That hasn’t stopped the Williamsons from worrying about whether they are doing the right thing in exposing him to so much attention.

“It’s not a natural thing to want to put your kid in the media spotlight,’’ Michelle said.

“We’ve met so many sharks. All they see is the financial element. They don’t see the emotional stuff. You can’t separate the art from Kieron.’’

A self-possessed blond boy, dressed in a polo shirt, shorts, and sneakers, Kieron doesn’t seem like a hothouse prodigy.

He likes soccer — he plays defense for a school team — and messing around on the broad North Sea beaches near his home in Holt, a pretty Georgian town 125 miles northeast of London.

When he talks about his work, it’s with a striking mix of the adult and the childlike. He can discuss his color choices and the interplay of light and dark, but also remembers more idiosyncratic details. “This,’’ he said, pointing at a landscape, “is when we came back from Holkham and we couldn’t get fish and chips because there was a line going from the fish and chip shop to the car park.’’

When he starts to draw, with a confident, relaxed fluidity, all childishness disappears. Working from a photograph of a river at sunrise, Kieron swiftly sketches the horizon, the mounds of trees and the line of the river, then uses pastels to color the yellowy pink of the sky.

His parents are happy for people to watch him work — it disproves any suspicions that the paintings are not his own.

Critical opinion on Kieron’s work is divided. Some have wondered whether Kieron’s paintings would be so well-regarded if he were an adult, and asked whether his talent will endure.

The precedents are mixed. Pablo Picasso famously said that unlike in music, “there are no child prodigies in painting. What people regard as premature genius is the genius of childhood. It gradually disappears as they get older.’’

Picasso himself was a child prodigy, however, who went on to revolutionize art.

He advises the Williamsons not to worry too much.

“Children like being successful and they like being the best,’’ Boyle said. “My advice? Take the money and run. Milk it for every penny, but don’t harm the child in the process.