Swap took place with no fanfare or announcement 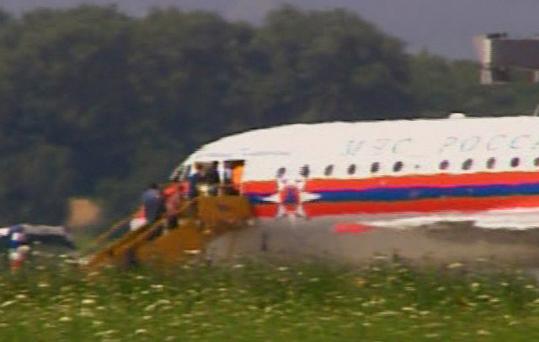 In this image from a TV report, unidentified people climbed the steps into a doorway of a Russian plane believed to be involved in yesterday’s spy swap at Vienna’s international airport. (Oft Tv via Associated Press)
By Nicholas Kulish and Peter Baker New York Times / July 10, 2010

VIENNA — In a scene reminiscent of the dark days of the Cold War, Russian and US officials traded prisoners in the bright sunlight on the tarmac of Vienna’s international airport yesterday, quickly ending an episode that had threatened to disrupt relations between the countries.

Planes carrying 10 convicted Russian sleeper agents and four men accused by Moscow of spying for the West swooped into the Austrian capital, once a hub of clandestine East-West maneuvering, and the men and women were transferred, according to a US official.

The planes soon took off again, presumably heading back to Russia and the United States in a coda fitting of an espionage novel.

By last night, the plane believed to be carrying some of the four accused Western spies landed at Dulles International Airport outside of Washington.

The first sign that the exchange — one of the biggest in more than two decades — was underway came as an American Vision Airlines jet carrying the Russian agents deported from the United States touched down and taxied to park only yards from the Russian plane from Moscow’s Emergencies Ministry.

For a while the only sound of movement was an emissary shuttling between the airplanes. Then, more than an hour later, with little fanfare and no formal announcement from either side, the Russian-flagged plane took off into clear blue skies, closely followed by the US airplane.

The swap was among the biggest since the Soviet dissident Anatoly Shcharansky — who as Natan Sharansky became a political figure in Israel — was released along with eight imprisoned spies in a classic Cold War exchange in 1986. But that exchange took place in a wintry Berlin across the snow-dusted Glienicke Bridge at a time when the Iron Curtain cut Europe into rival ideological camps and this city provided one of few avowedly neutral havens.

The swift conclusion to the case just 12 days after the arrest of the Russian agents — including two in Harvard Square — evoked memories of that time, but it also underscored the new-era relationship between Washington and Moscow. President Obama has made the “reset’’ of Russian-US relations a top foreign policy priority, and the quiet collaboration over the spy scandal indicates that the Kremlin likewise values the warmer ties.

The 10 sleeper agents had pleaded guilty to conspiracy before a federal judge in Manhattan after revealing their true identities. All 10 were sentenced to time served and ordered deported.

A lawyer for one of four prisoners freed by the Russian government called it “a historic moment’’ and said she believed her client, a former Russian intelligence agent named Aleksandr Zaporozhsky, would be reunited with members of his family, who live in the United States.

Within hours of the New York court hearing, the Kremlin announced that President Dmitry A. Medvedev had signed pardons for the four men Russia considered spies after each of them signed statements admitting guilt.

The Kremlin identified them as Igor V. Sutyagin, an arms control researcher held for 11 years; Sergei Skripal, a colonel in Russia’s military intelligence service sentenced in 2006 to 13 years for spying for Britain; Zaporozhsky, a former agent with Russia’s Foreign Intelligence Service who has served seven years of an 18-year sentence; and Gennadi Vasilenko, a former KGB major who was arrested in 1998 for contacts with a CIA officer but eventually released only to be arrested again in 2005 and later convicted on illegal weapons charges.