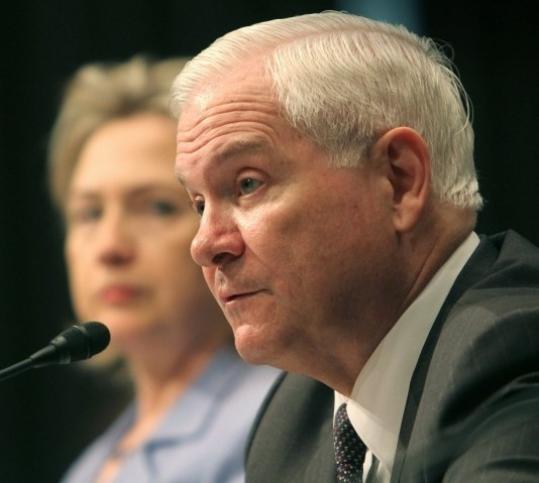 WASHINGTON — Russia will “always hate’’ US missile defenses because it cannot match them, but that should not stand in the way of ratifying a new US-Russian nuclear arms treaty, Defense Secretary Robert M. Gates said yesterday.

In blunt language, with the administration’s top diplomat, Secretary of State Hillary Rodham Clinton, sitting beside him, Gates told a Senate panel there is little prospect of Washington and Moscow seeing eye-to-eye on missile defense.

“There is no meeting of the minds on missile defense,’’ Gates said. “The Russians hate it. They’ve hated it since the late 1960s. They will always hate it, mostly because we’ll build it and they won’t.’’

Testifying together, Gates and Clinton sought to calm fears voiced by Senator John McCain about the arms treaty, dubbed New START, which includes language that the Arizona Republican said could limit future US missile defense options.

Clinton noted the Russian government’s statement that it reserves the right to withdraw from the New START treaty if it feels threatened by an expansion of American defenses against ballistic missiles.

“But that is not an agreed-upon view. That is not in the treaty,’’ Clinton told the Senate Armed Services Committee. “It’s the equivalent of a press release, and we are not in any way bound by it.’’

Clinton and Gates, joined by Admiral Mike Mullen, chairman of the Joint Chiefs of Staff, and Energy Secretary Steven Chu, showed a united front in the administration’s push for Senate ratification. They argued that the pact, while not perfect, enhances US security without constraining the shape of its nuclear force.

“It does not infringe upon the flexibility we need to maintain our forces, including bombers, submarines, and missiles in the way that best serves our own national security interest,’’ Clinton said.

Gates and Mullen stressed that the treaty, if ratified, would not require the Pentagon to change the size of its nuclear arsenal for seven years. Even then, the changes would be relatively minor, he said.

For as long as seven years into the future the United States would keep 720 deployed weapons: 240 submarine-launched ballistic missiles (distributed among 14 submarines); 60 heavy bombers, and up to 420 single-warhead Minuteman III intercontinental ballistic missiles at their current three US bases, Gates said.

Mullen said military leaders feel strongly that the United States should use that seven-year interval to assess the global strategic environment before deciding how to drop to the 700-weapon limit called for in the treaty.

The arms treaty was signed in April by President Obama and President Dmitry Medvedev of Russia, who is scheduled to visit the White House next week.

Gates also spoke pointedly of Russia’s conflicting interests regarding Iran. The subject arose when Senator Scott Brown, Republican of Massachusetts, told Gates he was troubled that France and Russia, by maintaining commercial relationships with Iran, were helping it circumvent international sanctions over its nuclear program.