May Day protests in Greece erupt in violence 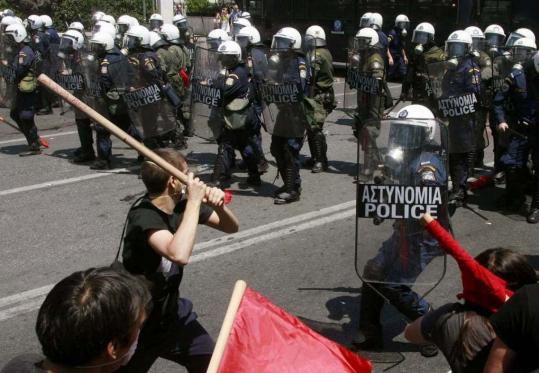 ATHENS — Hundreds rioted in Athens yesterday, throwing Molotov cocktails and stones at police, who responded with tear gas at a May Day rally against austerity measures being enacted by the cash-strapped government to secure foreign loans to stave off bankruptcy.

Police made at least nine arrests, including six people suspected of looting a shop. Seven officers were injured along with two demonstrators.

In Athens, groups of black-clad anarchists in hoods and motorcycle helmets smashed three shop and hotel windows and set up barricades of burning trash bins. Around 17,000 people took part in the march, according to police estimates.

Leftist and anarchist demonstrators heckled and threw plastic water bottles at former parliamentary speaker Apostolos Kaklamanis, a governing Socialist lawmaker, after spotting him among pedestrians on the sidelines of the Athens march.

Kaklamanis, 73, was hit and kicked but suffered no major injuries and was eventually whisked away by police.

May Day rallies in two North Caucasian republics turned violent as separatist militants attacked the gatherings. One man was killed and 30 people were injured when a bomb went off in Nalchik, the capital of the republic of Kabardino-Balkaria. Ten minutes earlier, an armed man was killed trying to enter a gathering in the city of Nazran, in neighboring Ingushetia.

Greece’s center-left government is set to announce more sweeping spending cuts through 2012 to win support for an international loan package worth $60 billion this year alone.

The Cabinet will meet today to approve the measures, with Finance Minister George Papaconstantinou expected to announce them and then fly to Brussels for an emergency meeting of euro-zone finance ministers.

The International Monetary Fund has said it will provide the money over three years, along with Greece’s partners in the euro zone. IMF and EU negotiators began talks in Athens on April 21 and continued yesterday at an Economy ministry building away from the protesters.

TV channel Mega said the Greek delegation, led by Papaconstantinou, Economy Minister Louka Katseli, and Defense Minister Evangelos Venizelos, had agreed on the essential measures and was still negotiating over the text of the law that will be submitted to Parliament as an emergency measure immediately after today’s Cabinet meeting.

Venizelos, a legal and constitutional expert, was included in order to help draft the law, the TV channel reported. “Negotiations are continuing,’’ Katseli said as she left the ministry last night. She did not comment on details.

French Finance Minister Christine Lagarde said yesterday after a meeting of French government officials that she was confident euro-zone finance ministers would approve the package by the end of the weekend. Governments are discussing a package of up to $159 billion over three years, she said.

In March, Athens announced belt-tightening measures aimed to save billions this year through cuts in civil service pay, higher indirect taxes and a crackdown on widespread tax evasion. But these proved insufficient, and additional austerity measures will be likely to include further hikes in consumer taxes, and deeper cuts in pensions and public service pay. Unions are furious.

“These measures are death. How people are going to live tomorrow, how they’re going to survive, I do not understand,’’ said Nikos Diamantopoulos, who was participating in a rally organized by pro-Communist unions.

Union members held a peaceful march to the Athens offices of the European Union and continuing to the US Embassy.

In the northern Greek city of Thessaloniki, where more than 5,000 people demonstrated, anarchists briefly clashed with police and smashed a few storefronts and ATMs. Greek unions have called a nationwide general strike for May 5.

Conservative opposition party New Democracy and the right-wing populist LAOS have been critical of the government but are seen as likely to support the package of measures. Left-wing parties have vowed to escalate protests.

“The Greek people do not owe anything to . . . those who have brazenly robbed public money and pension funds,’’ Left Coalition leader Alexis Tsipras said at one of the Athens rallies.

Accountant Virginia Kalapotharakou, who joined striking seamen and dockworkers rallying in the port of Piraeus, called the potential measures “very reactionary. They’re trying to do away with all the rights we gained through struggles in previous years,’’ she said.