In annual address, Benedict does not mention scandal 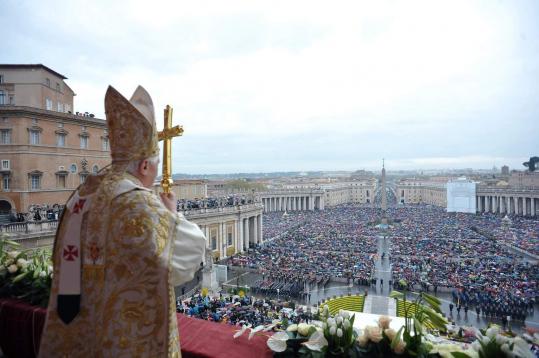 Pope Benedict XVI avoided the clergy sexual abuse controversy when he spoke yesterday in St. Peter’s Square at the end of Easter Mass. A cardinal said the bishops and 400,000 priests around the world stood by Benedict against the “gossip of the moment.’’ (L’Osservatore Romano/ AP)
By Daniel J. Wakin New York Times / April 5, 2010

VATICAN CITY — A prominent cardinal, in a marked departure from tradition, stood near Pope Benedict XVI at Easter Mass in St. Peter’s Square yesterday and delivered a very public expression of support in the face of growing anger over the Catholic Church’s sex abuse scandal, a topic left untouched by the pope in his Easter appearances.

The remarks on the day Christians celebrate the joy of Jesus’ resurrection were made by Cardinal Angelo Sodano, a former secretary of state and the dean of the college of cardinals. They were among a chorus of denunciations by church officials of what they have framed as a campaign of denigration of the church and its pontiff.

The ferocity of the response speaks to the very nature of the papacy: Its occupant inherits the throne of Peter, the church’s founder, and plays a unique role in the world as a religious figure and secular leader. And so, some churchmen and lay Catholics are interpreting questions about Benedict’s role in the scandal as an attack on the faith.

Shortly before the Mass started, with thousands of pilgrims filling a rain-swept St. Peter’s Square, Sodano offered special greetings to the pope, wished him a happy Easter, and said the bishops and 400,000 priests around the world stood by him.

“Holy Father, the people of God are with you, and do not let themselves be impressed by the gossip of the moment, by the challenges that sometimes strike at the community of believers,’’ Sodano said.

Jesus spoke of courage in the face of tribulations, the cardinal continued, and he referred to the apostle Peter’s account of Jesus during the passion: “When he was reviled, reviled not again; when he suffered, threatened not, but committed himself to him that judgeth righteously.’’

Benedict rose to greet Sodano with an embrace, clasping his shoulders warmly and shaking his hand. Vatican observers said they could not recall such an appearance in past Easter celebrations in St. Peter’s.

Shortly after the Mass, the pope took to the balcony and delivered his annual “Urbi et Orbi’’ — “To the City and to the World’’ — address, making no mention of the scandal but touching on the world’s trials and troubled places: the Middle East, Christian communities in Iraq and Pakistan, drug trafficking in Latin America, the earthquakes in Haiti and Chile, and conflicts in Africa.

“May the saving power of Christ’s resurrection fill all of humanity,’’ Benedict said, “so that it may overcome the multiple tragic expressions of a ‘culture of death’ which are becoming increasingly widespread.’’

The church hierarchy, from local bishops to the cardinals who run the church to Vatican officials, have grown increasingly aggressive in lashing back at sweeping criticism of the church, and more pointedly, at charges that Benedict failed to act strongly enough — both as a bishop in his native Germany and as leader of the Congregation for the Doctrine of the Faith before becoming pope — against pedophile priests.

The congregation had overall responsibility for such cases starting in 2001, and selectively before that. Benedict became pope in 2005.

The divide between the church and its critics, who include victims’ rights advocates and lawyers, editorial voices, and even the archbishop of Canterbury, has widened in the past two weeks, after continuing disclosures about a history of molestation of children by priests in parishes in Germany, Austria, Switzerland, the Netherlands, and France.

Leading the charge has been the Vatican’s official newspaper, L’Osservatore Romano, which published a summary yesterday of comments over Easter weekend in support of Benedict from bishops around the world. The headlines said Benedict was the target of “crude propaganda’’ and a “base defamatory operation.’’

Cardinal Norberto Rivera Carrera, the archbishop of Mexico City, said Benedict was facing “defamation and attacks of lies and vileness because of a few dishonest and criminal priests.’’ Lima’s archbishop, Cardinal Juan Luis Cipriani, said the church’s enemies have mistreated the pope with “with an unusual lack of respect for the truth and an incredible show of cynicism.’’

Cardinal André Vingt-Trois, the archbishop of Paris, cited an “offensive that aims at destabilizing the pope, and through him, the church.’’

The closing of ranks notably included a sermon delivered before the pope on Good Friday by the Rev. Raniero Cantalamessa, who seemed to equate the criticism of the church over the priest sex abuse scandal with anti-Semitism, antagonizing both victims’ groups and Jewish leaders.

That appeared to go too far.

The Vatican’s official spokesman disassociated the Holy See and the pope from the sentiment, and Cantalamessa backtracked in an interview published yesterday in the Italian newspaper Corriere della Sera.

“If, against every intention, I hurt the feelings of Jews and victims of pedophilia, I am truly sorry and apologize, reaffirming my solidarity with both,’’ he said.

Rather than showing hostility toward the Jews, he said, his intention was to make a friendly gesture.

Cantalamessa went on to say that the pope had nothing to do with the speech, but he acknowledged that someone in the Vatican had asked to see the text beforehand.