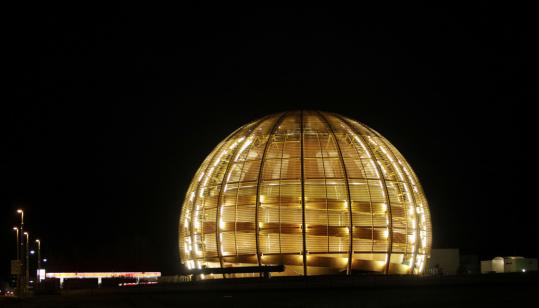 GENEVA — The world’s largest atom smasher conducted its first experiments at conditions nearing those after the Big Bang, breaking its own record for high-energy collisions with proton beams crashing into each other yesterday at three times more force than ever before.

In a milestone for the $10 billion Large Hadron Collider’s ambitious bid to reveal details about theoretical particles and microforces, scientists at the European Organization for Nuclear Research, or CERN, took high-tech photographs so they could study the disintegrating protons after they collided at a combined energy level of 7 trillion electron volts.

The collisions herald a new era for researchers working on the machine in a 17-mile tunnel below the Swiss-French border at Geneva.

“That’s it! They’ve had a collision,’’ said Oliver Buchmueller from Imperial College in London as people closely watched monitors.

In a control room, scientists erupted with applause when the first successful collisions were confirmed. Their colleagues from around the world were tuning in by remote links to witness the record, which surpasses the 2.36 TeV CERN recorded last year.

Dubbed the world’s largest scientific experiment, researchers hope the machine can approach on a tiny scale what happened in the first split seconds after the Big Bang, which they theorize was the creation of the universe about 14 billion years ago.

The extra energy in Geneva is expected to reveal even more about the unanswered questions of particle physics, such as the existence of antimatter and the search for the Higgs boson, a hypothetical particle that scientists theorize gives mass to other particles and thus to other objects and creatures in the universe.

Yesterday’s initial attempts at collisions were unsuccessful because problems developed with the beams, said scientists working on the massive machine. That meant the protons had to be “dumped’’ from the collider and new beams had to be injected.

The atmosphere at CERN was tense considering the collider’s launch with great fanfare on Sept. 10, 2008. Nine days later, the project was sidetracked when a badly soldered electrical splice overheated, causing extensive damage to the massive magnets and other parts of the collider some 300 feet below the ground.

It cost $40 million to repair and improve the machine. Since its restart in November 2009, the collider has performed almost flawlessly and given scientists valuable data. It quickly eclipsed the next largest accelerator — the Tevatron at Fermilab near Chicago.

Two beams of protons began 10 days ago to speed at high energy in opposite directions around the tunnel, the coldest place in the universe, at a couple of degrees above absolute zero. CERN used powerful superconducting magnets to force the two beams to cross, creating collisions and showers of particles.

“Nature does it all the time with cosmic rays (and with higher energy) but this is the first time this is done in Laboratory!’’ said another tweet.