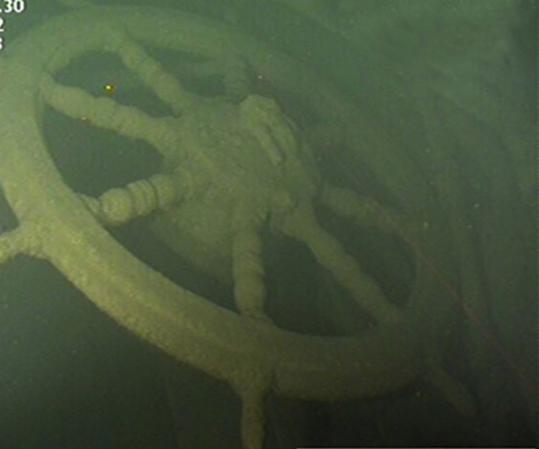 A wheel from a 18th- or 19th-century sailing ship was found in the Baltic Sea, near the Swedish island of Gotland. (Nord Stream via Associated Press)
Associated Press / March 10, 2010

STOCKHOLM - A gas company building an underwater pipeline in the Baltic Sea has found a dozen centuries-old shipwrecks - some of them unusually well preserved.

The oldest wreck probably dates to medieval times and could be up to 800 years old, while the others may be from the 17th to 19th centuries, Peter Norman of Sweden’s National Heritage Board said yesterday.

“They could be interesting, but we have only seen pictures of their exterior. Many of them are considered to be fully intact. They look very well preserved,’’ Norman said.

Thousands of wrecks - from medieval ships to warships sunk during the world wars of the 20th century - have been found in the Baltic Sea, which doesn’t have the ship worm that destroys wooden wrecks in saltier oceans.

The latest discovery was made during a search east of the Swedish island of Gotland by the Nord Stream consortium, which is building a 750-mile pipeline between Russia and Germany.

The 12 wrecks were found in a 30-mile-long, 1.2-mile-wide corridor, according to a Nord Stream spokeswoman.

The Heritage Board said three have intact hulls and are upside down at a depth of 430 feet.

It’s unclear whether any of them will be salvaged, but the board said it hopes divers will explore them..