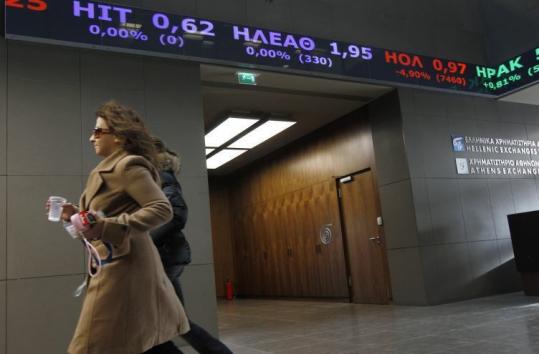 NEW YORK - Wall Street tactics akin to the ones that fostered subprime mortgages in America have worsened the financial crisis shaking Greece and undermining the euro by enabling European governments to hide their mounting debts.

As worries over Greece rattle world markets, records and interviews show that with Wall Street’s help, the nation engaged in a decadelong effort to skirt European debt limits. One deal created by helped obscure billions in debt from the budget overseers in Brussels.

Even as the crisis was nearing the flashpoint, banks were searching for ways to help Greece forestall the day of reckoning. In early November - three months before Athens became the epicenter of global financial anxiety - a team from Goldman Sachs arrived in the ancient city with a very modern proposition for a government struggling to pay its bills, according to two people who were briefed on the meeting.

The bankers, led by Goldman’s president, Gary D. Cohn, held out a financing instrument that would have pushed debt from Greece’s health care system far into the future, much as when strapped homeowners take out second mortgages to pay off their credit cards.

It had worked before. In 2001, just after Greece was admitted to Europe’s monetary union, Goldman helped the government quietly borrow billions of dollars, people familiar with the transaction said. That deal, hidden from public view because it was treated as currency trade rather than a loan, helped Athens to meet Europe’s deficit rules while continuing to spend beyond its means.

Athens passed on the latest Goldman proposal, but with Greece groaning under the weight of its debts and with its richer neighbors vowing to come to its aid, the deals over the past decade are raising questions about Wall Street’s role in the world’s latest financial drama.

As in the US subprime crisis and the implosion of the , financial derivatives played a role in the run-up of Greek debt. Instruments developed by Goldman Sachs, , and a wide range of other banks enabled politicians to mask additional borrowing in Greece, Italy, and possibly elsewhere.

In dozens of deals across the continent, banks provided cash upfront in return for government payments in the future, with those liabilities then left off the books. Greece, for example, traded away the rights to airport fees and lottery proceeds in years to come.

Critics say that such deals, because they are not recorded as loans, mislead investors and regulators about the depth of a country’s liabilities.

The crisis in Greece poses the most significant challenge yet to Europe’s common currency, the euro, and the continent’s goal of economic unity. The country is, in the argot of banking, too big to be allowed to fail. Greece owes the world $300 billion, and major banks are on the hook for much of that debt. A default would reverberate around the globe.

A spokeswoman for the Greek Finance Ministry said the government had met with many banks in recent months and had not committed to any bank’s offers. Goldman and JPMorgan declined to comment.

Wall Street has been sharply criticized in Greece and in magazines such as Der Spiegel, the German newsweekly.

“Politicians want to pass the ball forward, and if a banker can show them a way to pass a problem to the future, they will fall for it,’’ said Gikas A. Hardouvelis, an economist and former government official who helped write a recent report on Greece’s accounting policies.