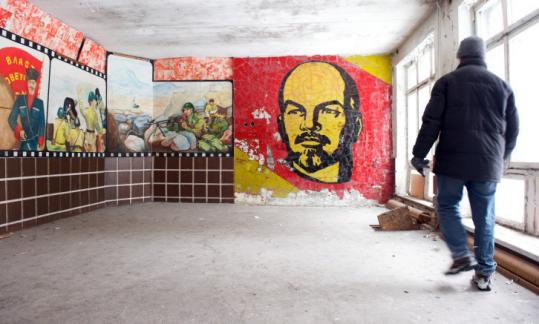 A man walked past pictures in a building in Skrunda-1, which is about 95 miles from the Latvian capital of Riga. (Ilmars Znotins/AFP/Getty Images)
Associated Press / February 6, 2010

The town formerly known as Skrunda-1 housed about 5,000 people during the Cold War. It was abandoned over a decade ago after the Russian military withdrew from Latvia following the Soviet collapse.

A representative of a Russian investor won the bidding contest in Latvia’s capital, Riga, with an offer of $3.1 million, said Anete Fridensteina-Bridina, a spokeswoman for the Baltic country’s privatization agency.

She said the buyer was Aleksejevskoje-Serviss, a Russia-based firm, though she could not provide details.

It was not immediately clear what plans the buyer had for the 110-acre property, which is located in western Latvia about 95 miles from Riga. The town contains about 70 dilapidated buildings, including apartment blocks, a school, barracks, and an officers’ club.

Built in the 1980s, Skrunda-1 was a secret settlement not marked on Soviet maps because of the two enormous radar installations that listened to objects in space and monitored the skies for a US nuclear missile attack.

Like all clandestine towns in the Soviet Union, it was kept off maps and given a code name, which usually consisted of a number and the name of a nearby city.

After the Soviet Union fractured in 1991, a newly independent Latvia was eager to scuttle all Soviet military bases and expel Russian troops.

Russia’s Defense Ministry, however, continued to rely on Skrunda’s early-warning system, and as a result the radar base was for years used as a negotiation tool between Washington and Moscow.

Finally, in 1998 the last residents of Skrunda-1 departed, leaving behind hundreds of vacant apartments and dozens of buildings.

Talk about transforming the town into a recreational area went nowhere. It was two years ago that Latvia’s government decided to put the settlement on the auction block.