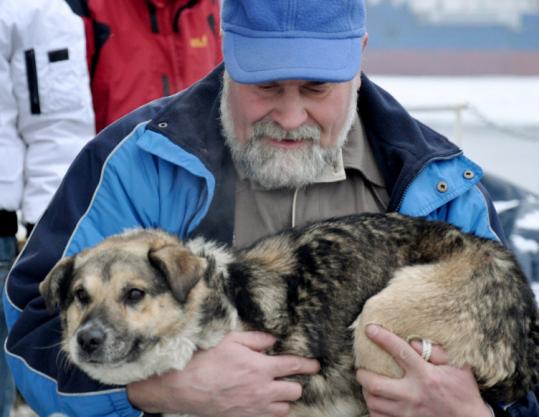 The researchers who rescued the dog nicknamed him Baltic. Four people have tried to claim him. (Maciej Czoska/Associated Press)
By Associated Press January 29, 2010

WARSAW - A frightened, shivering dog was rescued after floating 75 miles on an ice floe down Poland’s Vistula River and into the Baltic Sea, officials said yesterday.

Now his saviors have to figure out who really owns him.

Four people have tried to claim him, but rescuers say there has been no wagging tail of joy from the miracle dog they nicknamed “Baltic.’’

The dog’s frozen odyssey occurred as Poland suffers through a winter cold snap, with temperatures dipping to minus 4 degrees.

The thick-furred male dog was found adrift Monday 15 miles out in the Baltic Sea by the crew of the Baltica, a Polish ship of ocean scientists carrying out research.

Researcher Natalia Drgas said yesterday that the rescue was difficult.

“It was really a tough struggle. It kept slipping into the water and crawling back on top of the ice. At one point it vanished underwater, under the ship, and we thought it was the end. But it emerged again and crawled on an ice sheet,’’ Drgas said.

At that point, the crew lowered a pontoon to the water, and a crew member grabbed the dog.

A firefighter in Grudziadz, on the Vistula river 60 miles inland from the Bay of Gdansk, said the dog was spotted Saturday. Firefighters tried to save him, but could not because the ice sheets were shifting, said the firefighter.