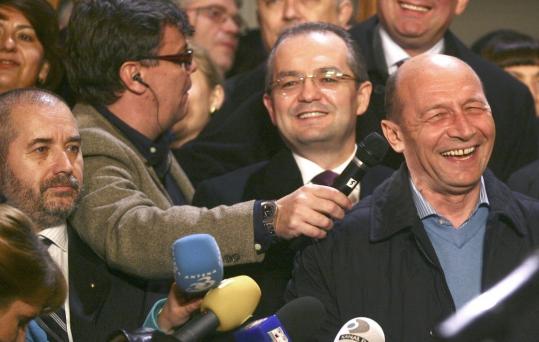 BUCHAREST, Romania - Was a top contender for the Romanian presidency zapped out of the race by a shadowy parapsychologist enlisted by his rival?

The claim might be dismissed as preposterous in most other European Union countries. But here in Romania, home of Dracula and other occult traditions, Mircea Geoana’s assertion that a “negative energy attack’’ led to his narrow loss to reelected President Traian Basescu has been the talk of the nation.

“The Evil Witch defeated Geoana,’’ wrote the daily Evenimentul Zilei in a recent commentary typical of the buzz. “Romanian politicians really believe that magic forces can make you president or can destroy you.

Like most former Soviet bloc nations, Romania is used to rough and tumble politics and the first claims and counterclaims after Basescu’s narrow Dec. 6 runoff victory were nothing out of the ordinary, with Geoana’s people complaining of massive fraud.

Then came the startling allegation: Geoana, in media interviews last week, asserted that he was targeted by waves of negative energy during a key debate just before the runoff that was won by Basescu.

“People who were working for Basescu in this domain were present to the right of the camera,’’ Geoana told Antena 3 Television. His wife, Mihaela said Geoana “was very badly attacked, he couldn’t concentrate.’’

At first Romanians mocked their former foreign minister saying he was a bad loser. Basescu himself jokingly dismissed the allegations. But the recent publication of photos showing well-known parapsychologist Aliodor Manolea close to Basescu during the campaign has caused Romanians to wonder whether the president really did put a hex on his rival.

The photos show Manolea, a slightly built, bearded man with a round face and cropped receding hair, walking yards behind Basescu ahead of the debate. Manolea’s specialties include deep mind control, clairvoyance, and hypnotic trance, according to the Romanian Association of Transpersonal Psychology.

For weeks, Basescu’s office declined to comment on Manolea, with officials referring inquiries to the Liberal Democratic Party that supported the president. Officials there gave evasive answers, but not outright denials.

In comments published Friday, Basescu spokesman Sever Voinescu said he knew Manolea but that the parapschycologist did not take part in campaign staff meetings. Voinescu also said he did not discuss Manolea with Basescu.

Manolea’s alleged role in the elections evokes age-old Balkan rituals in which the evil eye, witch doctors and other mysterious forces were used to launch mystic energy attacks on opponents and sap hapless victims of their vital strength.

While such superstitions are now usually found only in the most backward rural pockets of the Balkans, belief in the paranormal spawned some unusual practices up to recent times.

Former Romanian dictator Nicolae Ceausescu was so terrified of even traditional psychologists he feared were a threat to communism that he abolished psychology departments across the country and banned the word from the official dictionary.

In neighboring Serbia, Colonel Ljubodrag Stojadinovic, a former army spokesman, was discharged after divulging that the military had a parapsychology unit in the 1990s under ex-President Slobodan Milosevic that launched psychic attacks on the United States and other enemies.

“Group 69,’’ which Stojadinovic said included publicly known fortune tellers and witches, claimed to have inflicted “heavy losses’’ against the enemy.

Neither the Serbian government nor the military has issued a denial of Stojadinovic’s claims.

Wartime Bosnian Serb leader Radovan Karadzic was said to have believed in witchcraft and actively participated in paranormal activities. Now on trial for at the War Crimes Tribunal in The Hague, he was arrested in July 2008 in Belgrade disguised as a New Age guru.