Funeral aside, declining population may not mean the death of Venice 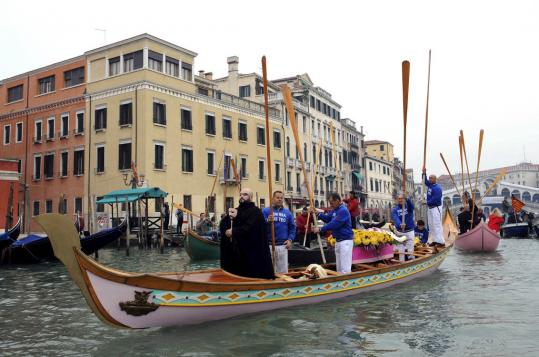 Venetians staged a mock funeral procession yesterday. Venice’s population is now below 60,000, a largely symbolic threshold considered by some to signal the end of the city’s viability. (Luigi Costantini/Associated Press
)
By Colleen Barry and Luigi Costantini Associated Press / November 15, 2009

While the largely symbolic threshold is considered by some to signal the end of the city’s viability, Venetian officials say reports of the city’s demise are premature.

In fact, while native Venetians have been fleeing the expensive lagoon city for cheaper and easier living on the mainland, the population of the historic center was officially 60,025 as of Thursday, up from the 59,992 it had fallen to in recent weeks.

“They will have the funeral in a living village, not yet dead. And it won’t die, even if it goes to 59,999,’’ Mara Rumiz, the city official in charge of demographics, said.

She said the numbers don’t take into account the inhabitants of Venice’s islands - including glassmaking Murano and the Lido beach - nor the many who are not officially registered, including students. Together, they add another 120,000 souls.

“It is evident that Venice has to safeguard its residents and attract new inhabitants. If not, we risk that Venice becomes only a tourist mecca, and this is a destiny that we don’t want,’’ Rumiz said.

But consider the logistics of an everyday errand like grocery shopping. One would most likely need a water taxi ride to a supermarket, another to get home with the groceries, and then with few elevators in residential buildings, there is a heavy load to lug upstairs. Historic Venice does not permit the comfort of a car parked outside the door.

Yet as if to echo Rumiz’s optimism about Venice’s fate, yesterday’s mock funeral ended with an unexpected bright look to the future.

The ceremony kicked off with a procession of gondolas down the canal. The boats docked in front of Ca’ Farsetti, the palazzo housing Venice’s city hall, where hundreds of Venetians joined

But after a black-caped actor read poetry in Venetian dialect bemoaning the problems of life in the lagoon city, the “pallbearers’’ smashed open the coffin and pulled out a flag of La Fenice - phoenix in Italian.

Venetians themselves would like to see more money put toward retaining natives. “People go to live where you don’t have to spend too much,’’ said resident Alberto Gallo. “Many would like to remain, but they can’t.’’

But who is a Venetian, really? Genetically, a National Geographic Study being conducted by experts from the Worcester Polytechnic Institute in Massachusetts intend to find out.

They took advantage of yesterday’s “funeral’’ to take saliva swabs to determine where most of the natives of Veneto - the larger region of which Venice is the capital - came from, northern Europe or lands around the Caspian Sea.

“It will be an opportunity to find a few Venetians,’’ said Gallo