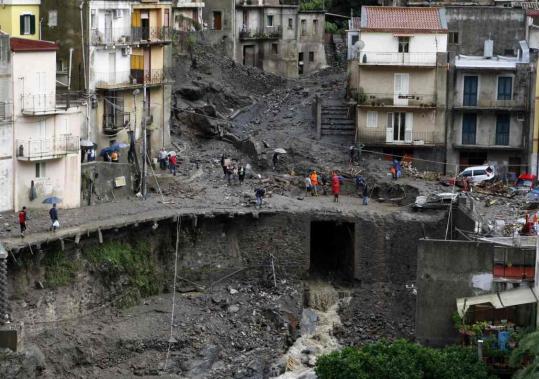 A road collapsed yesterday in the village of Molino near Messina in Sicily. Environmentalists suggested the deadly mudslides could be attributed in part to unregulated development. (Antonio Parrinello/Reuters)
Associated Press / October 3, 2009

ROME - Rivers of mud unleashed by heavy rains Thursday night flooded parts of the Sicilian city of Messina, leaving at least 20 people dead while sweeping away cars and collapsing buildings. Hundreds were driven from their homes.

Rescuers with sniffer dogs searched yesterday for several people missing after the mud swamped entire villages and suburbs of Messina on the island’s eastern coast, Mayor Giuseppe Buzzanca said. Rescue efforts were hampered by the fact that many roads were impassable and the terrain still unstable with continuing rains.

Residents and firefighters used shovels and bulldozers to clear the mud, which in some areas reached as high as the door handles of cars and homes.

At least 20 people were killed, officials in the prefect’s office said. Another 40 people were hospitalized, many of them transported by sea, civil protection chief Guido Bertolaso said. Authorities gave varying numbers for people missing, ranging from five to 20.

The government in Rome declared a state of emergency for the area, freeing funds for emergency relief and reconstruction.

Officials blamed the storm, which unleashed 9 inches of rain in three hours. But they acknowledged that deforestation and unregulated development had weakened the soil and contributed to the mudslides from Messina’s surrounding hills and cliffs.

They were Italy’s deadliest landslides since 1998, when a rain-drenched mountain near Naples unleashed a torrent of mud that submerged villages and killed 150.

Among those killed around Messina was a man who was submerged and suffocated in the mud on the main piazza of a southern suburb, the ANSA news agency said. Another man drowned in the flooded cellar of his country home, it said.

“Either we take on the job of securing all the nation’s territory, or these tragedies are destined to be repeated,’’ Bertolaso said.

“Our country is paying a high price for having devastated the land with enormous and uncontrolled’’ construction, Vittorio Cogliati Dezza, Legambiente’s president, said in a statement.