Polanski faces months in prison as he fights extradition

Lawyer wants him released during process 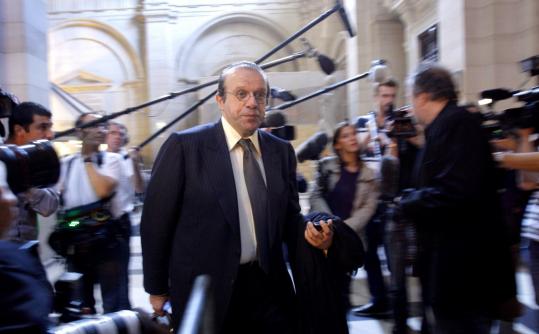 Herve Temime, Roman Polanski’s French lawyer, raised the possibility that Polanski could be confined in his home in Switzerland instead of in prison. (Christophe Ena/Associated Press)
By Henry Chu Los Angeles Times / September 30, 2009

ZURICH - Gone are the red carpet and the luxury accommodations, at least for a while. Film director Roman Polanski probably will remain in prison for several months as he fights deportation to the United States in a three-decade-old sexual assault case.

His Swiss lawyer, one of the country’s top criminal lawyers, filed a request in court yesterday that Polanski be set free while his extradition case wends its way through the judicial system.

But such releases are rare in Switzerland for nonresidents, who generally are deemed to be flight risks. And given the lengthy extradition and appeals process, Polanski, 76, faces jail time far exceeding the 42 days he served in Los Angeles back when the charges against him arose.

“We are talking about three, four months easily,’’ said Peter Cosandey, a former prosecutor here with extensive experience in extradition cases. “If he’s not released on bail as requested by his lawyers, then he has to remain in prison.’’

Exactly where Polanski is being held has been kept secret for security reasons, which is normal procedure in Switzerland. Diplomats at the Polish Embassy, who met with Polanski on Monday, declined to disclose his location “to not make it easier for paparazzi to find him,’’ Consul Marek Wieruszewski said in a telephone interview from Bern, the Swiss capital.

Polanski has Polish and French citizenship. French diplomats also have been in contact with the director. He is entitled to unlimited access to his Swiss lawyer, Lorenz Erni, and to consular officials. But beyond that, Polanski is living the life of any other jailed suspect.

“He stressed that he’s being treated very well . . . with respect and even some sympathy to his situation,’’ Wieruszewski said.

Polanski’s arrest Saturday night, after his arrival in Zurich to receive a lifetime achievement award at a film festival, has inspired impassioned debate across Europe and in North America. Artists and members of the film world on both sides of the Atlantic have rallied behind him, demanding his release, as have government officials in France and Poland. A letter from the Polish and French foreign ministers to Secretary of State Hillary Rodham Clinton asking her to intervene in the matter was due to be delivered yesterday.

But public reaction has been mixed, with many Europeans aghast at support for a fugitive who fled the United States in 1978 in the face of charges that he plied a 13-year-old girl with alcohol and drugs and then had sex with her. The director pleaded guilty to having unlawful sex with the girl, but he left the country before sentencing.

The United States has 40 days from the time of the arrest to lodge a formal extradition request, a period that can be extended to 60 days. The Swiss Justice Ministry then has a week or two to examine the request. If authorities accept the request, Polanski can file a formal appeal in federal court, which would take another few weeks. Convincing authorities that he ought to be released on bail in the interim would be tough.

The director owns a residence in the Swiss resort town of Gstaad, and his lawyer in France, Herve Temime, raised the possibility that Polanski could be confined there instead of in prison.

“He has a chalet in Switzerland. He would naturally accept to be placed under house arrest,’’ Temime told reporters in Paris. Erni, Polanski’s Swiss lawyer, did not return calls seeking comment.

Once an extradition request from the United States is submitted, Swiss authorities have little room to maneuver in ruling on it, Cosandey said. Under the extradition treaty, the hearing largely is an administrative matter, and as long as proper procedures are followed and administrative criteria satisfied, Switzerland has little choice but to grant the request.

Media here have speculated that Swiss authorities approached the United States first with information that Polanski would be attending the film festival in Zurich.