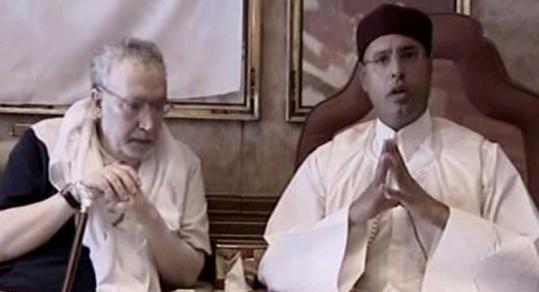 LONDON - The release of the only man convicted of blowing up a Pan Am flight in 1988 has brought high drama and controversy: the jeering mob outside a Scottish prison, the cheering crowd at a Tripoli airport, the furious families of the 270 people who died in the Lockerbie bombing.

Britain yesterday condemned the “upsetting’’ scenes of jubilation in Tripoli at the return of Abdel Baset al-Megrahi and considered canceling a royal visit to Libya as a sign of displeasure. President Obama said the warm welcome in Libya was “highly objectionable.’’

Despite the strong words, the diplomatic end of the decades-long Lockerbie saga is unlikely to damage steadily warming relations between the West and Libya, a country once reviled as a pariah state. “It will introduce a note of caution in the West’s dealing with Libya,’’ said Diederik Vandewalle, a Libya specialist at Dartmouth College. “I don’t think it will have much of an impact at all.’’

Thousands of young men greeted Megrahi’s plane at a Tripoli airport after he was released from a Scottish prison Thursday on compassionate grounds. Some threw flower petals as the 57-year-old former Libyan intelligence agent stepped from the jet.

British Foreign Secretary David Miliband called the scene distressing, adding that the way Moammar Khadafy’s government behaved in the next few days would help determine whether Libya is accepted back into the international fold.

“I think the images that we saw in Libya yesterday were outrageous and disgusting,’’ White House spokesman Robert Gibbs said.’’ We continue to express our condolences to the families that lost a loved one as a result of this terrorist murder.’’

Gibbs said the White House had been in contact with Libyan authorities. “We’ve registered our outrage. . . . We’ll continue to watch the actions of this individual and the Libyan government.’’

Yet by Libyan standards, Megrahi’s welcome was relatively muted. Hundreds of people waiting in the crowd for his plane were rushed away by authorities at the last minute, and the arrival was not aired live on state TV.

It was an unusually low-key approach for a country that used to snap up any opportunity to snub the West and could easily bring out hundreds of thousands to cheer if it so chose. It suggested that Libya is wary of hurting its ties with the United States and Europe and had listened to Obama’s warning not to give Megrahi a hero’s welcome.

“It seemed as some form of last-minute compromise between those who felt it their patriotic duty to welcome him and those in the Libyan hierarchy who wanted to heed the demands of the US that it should be low-key,’’ said Richard Dalton, a former British ambassador to Libya.

“There was no Libyan dignitary to receive him, and no formal reception. This is compulsory in Arab hospitality, so the absence of a welcoming party is quite significant,’’ he added.

Megrahi is the only man convicted in the bombing of Pan Am Flight 103 over Lockerbie, Scotland. The explosion of a bomb hidden in the cargo hold killed all 259 people on the plane and 11 on the ground in Britain’s worst terrorist attack. About 30 victims had New England ties, including Boston College students Karen Noonan and Patricia Coyle, Syracuse University students Nicole Boulanger of Shrewsbury and Gary Colasanti of Melrose, Nicolas Bright and Julian Benello, both of Brookline, and Thomas Walker of Quincy.

Although the legal story of Lockerbie is now over, some argue that the full truth about the attack may never be known. Although Libya accepted formal responsibility for the bombing, many there see Megrahi as an innocent victim scapegoated by the West.

The Libyan’s lawyers have argued the attack was the result of an Iranian-financed Palestinian plot, and a 2007 Scottish judicial review of Megrahi’s case found grounds for an appeal of his conviction.

Some Lockerbie victims’ relatives in Britain were disappointed when Megrahi dropped his appeal against his conviction, which he had to do in order to be freed.