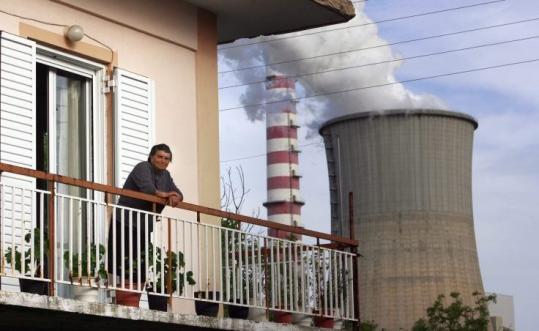 In Megalopolis, Greece, the air is heavy with dust and smoke from plants that burn brown coal to generate electricity. (John Kolesidis/ Reuters)
By Ingrid Melander Reuters / August 2, 2009

MEGALOPOLIS, Greece - Lignite power plants belch dust and smoke into the air above the southern Greek town of Megalopolis, but residents resistant to environmental arguments have blocked a scheme to build the country’s biggest solar energy project on a nearby hillside.

Local game hunters, angry that an earlier plan to grow a forest on the site was scrapped, have gone to court to try to stop the construction of a 50-megawatt solar panel park.

“Under no conditions will we accept sacrificing even one tree . . . we are not bowing to these interests,’’ Kostas Markopoulos, president of the Hunters’ Association of the Peloponnese, said on a visit to the site on a hill overlooking the small town.

Below lie the huge open-air mines where lignite, a cheap but highly polluting energy source also known as brown coal, is extracted and adjacent plants where it is burned to generate electricity for southern Greece. The nearest houses stand only about 300 feet away.

Red tape, a lack of political will, and local opposition have cramped the development of an otherwise promising renewable energy market in Greece, whose climate is endowed with plenty of sunshine and wind.

This puts Greece far behind European Union leaders in the field, such as much less sunny Germany.

Despite one of the most generous government subsidies and long-term guaranteed electricity prices worldwide, it ranked 18th in percentage of renewables as a proportion of gross electricity consumption in the EU in 2007.

The Megalopolis project, using photovoltaic panels to convert sunlight into electricity, would be one of the biggest solar energy schemes in the world. It is expected to cost $280 million to $349 million.

Nearly two years after electricity operator PPC was granted production licenses, nothing has been built on the site. A court ruling on the hunters’ appeal is still awaited.

Investors, waiting for years to tap Greece’s huge potential, say that after decades of struggling with endless bureaucracy, they see some reason for hope as new legislation takes effect.

“In the past 15 years, Greece has been the sleeping giant of European renewables,’’ said Nikos Vassilakos, who heads a Greek and a European association of investors in renewables. “Now something is moving, maybe at a slow pace, but investors have learnt to be patient.’’

Greece is notorious for its long licensing procedure, which Vassilakos estimated at three to four years on average.

The government has just passed a zoning law for renewables as well as approved new incentives for individuals to install solar panels on rooftops and sell the electricity, doing away with a licensing process that used to cost thousands of euros.

Within the next two months, it plans to submit a law to shorten procedures for wind farms and small hydroelectric plants.

With installed capacity of about 1,200 megawatts, mostly from wind, Greece must move up a gear to comply with EU rules.

It needs to produce more than a third of its electricity from renewables by 2020, from about 9 percent currently - the figure drops to about 4 percent without large hydro plants, which specialists say is a more realistic assessment.

Investors present in the Greek renewables market include Italy’s Enel, France’s EDF, and Spain’s Iberdola, as well as other, smaller companies. More than $5.65 billion worth of renewable applications are awaiting approval by Greece’s energy regulator.

“It’s an exciting moment,’’ Vassilakos said. “Look at how big the untapped potential is.’’

Walking around the mine and the hamlets bordering the plant, where pollutants in the air burn the throat after just a few minutes, the hunters’ leader, Markopoulos, is unconvinced.

“A [solar] park here at such a large scale . . . would be one large mirror that will drive away wildlife,’’ he said. “This should be done in other areas, and they exist, that do not destroy the natural environment.’’