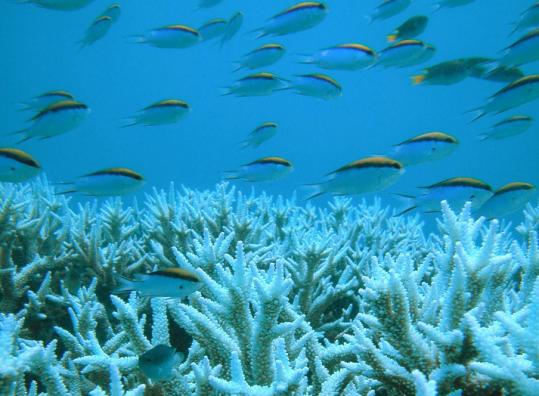 GENEVA - Governments are failing to stem a rapid decline in biodiversity that is now threatening extinction for almost half the world’s coral reef species, a third of amphibians, and a quarter of mammals, a leading environmental group warned today.

“Life on Earth is under serious threat,’’ the International Union for Conservation of Nature said in a 155-page report that describes the past five years of a losing battle to protect species, natural habitats, and geographical regions from the devastating effects of man.

IUCN, the producer of the world’s Red List of endangered animals, analyzed more than 44,000 species to test government pledges earlier this decade to halt a global loss in biodiversity by 2010.

That target will not be met, the Gland, Switzerland-based body said, describing the prospects of coral reefs as the most alarming. It also said slightly more amphibians, mammals, and birds were in peril compared with five years ago, with species most prized by humans for food or medicine as disproportionately threatened.

“Biodiversity continues to decline, and next year no one will dispute that,’’ said Jean-Christophe Vie, the report’s senior editor. “It’s happening everywhere.’’

Vie said biodiversity threats need to be highlighted and combated, even at a time when many world leaders are preoccupied by economic recession. Unlike markets and debts, extinction is an irreversible element of today’s “wildlife crisis.’’

He urged governments to usher in major changes to society, such as reducing energy and overall consumption, redesigning cities, and reassessing the environmental consequences of globalization - producing goods in one part of the world and sending them thousands of miles to be sold.

In Europe, “about 50 percent of species are under threat or vulnerable,’’ said Barbara Helfferich, a European Union spokeswoman. “Habitats are shrinking and a lot needs to be done. We are doing a lot, but it’s not enough as promised to halt biodiversity loss.’’