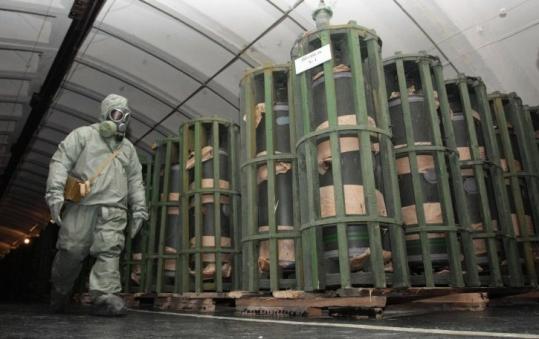 A worker passed by a stockpile of objects awaiting destruction at the facility in Shchuchye, Russia. The plant was built with the help of $1 billion from the United States. (Reuters)
By Jim Heintz Associated Press / May 30, 2009
Text size – +

SHCHUCHYE, Russia - Rising out of the rolling fields and tree-lined country roads of southern Siberia is a complex of hulking metal buildings, piping, and high-security fencing.

Its purpose? To cope with one of the nastiest legacies of the Cold War.

Yesterday, Russian and US officials formally dedicated the high-tech plant, built with the help of $1 billion from the United States and designed to destroy about 2 million chemical-weapon shells.

The opening was a major step toward disposing of Russia's huge stockpile of Soviet-era chemical weapons, and a rare example of cooperation between two nations that still don't quite trust one another two decades after the Soviet collapse.

The 25-structure complex, the size of a small town, was largely funded by the United States under a program called the Cooperative Threat Reduction initiative, launched a year after the Soviet collapse. It is meant to help Russia cope with its Cold War arsenal of weapons of mass destruction.

Senator Richard Lugar, an Indiana Republican who helped author much of the legislation that set up the program, came to the plains of Siberia yesterday to speak at the dedication of the building, the program's largest single project.

"The path to peace and prosperity for both Russia and the United States depends on how we resolve the threats posed by the arsenals built to fight World War III," Lugar said. "Thankfully that confrontation never came. But today we must ensure that the weapons are never used, and never fall into the hands of those who would do harm to us or others."

In his speech, Lugar referred in passing to recent tensions between Moscow and Washington, which peaked during last year's brief war between Russia and the former Soviet nation of Georgia, a US ally.

The weapons at Shchuchye, loaded with nerve gases including VX and sarin, have a cataclysmic potential for terrorist attacks. If set off in a tightly packed area, each could kill tens of thousands of people. Many of them are small enough to fit in a briefcase.

Russia, as a signatory of the international Chemical Weapons Convention, is obliged to eliminate its vast stores of Class I weapons - chemicals that have no use other than in arms. Moscow already has destroyed about 30 percent of its stockpile, according to the Russian Munitions Agency.

"In this context, Shchuchye is the most important facility allowing us to fulfill this task," said Viktor Khristenko, the Russian minister of industry.

But the Shchuchye facility significantly boosts destruction capacity. Russian officials say it will allow the country to meet its treaty obligations of destroying all chemical weapons by 2012, although Lugar said that goal probably will not be met.

Nonetheless, the opening - which follows preliminary destruction work that began in March - is significant because of the dangers posed by the weapons.

The opening of the plant comes at a symbolically important time, as Russia and the US try to agree on a replacement to the START nuclear arms reduction treaty that expires at the end of this year. It also comes as both countries tentatively try to repair relations that have deteriorated in recent years.