Carving may be oldest of human form 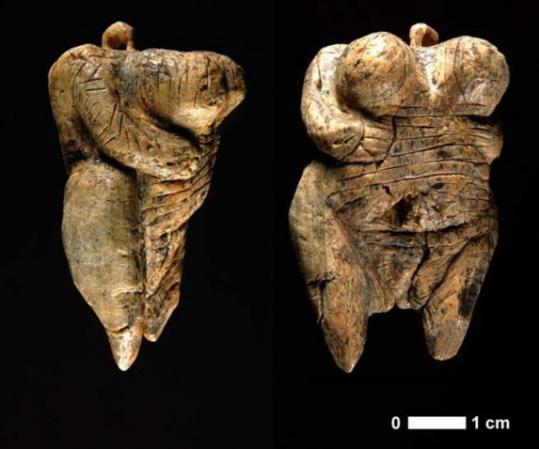 Side and front views of a sculpture of a woman found in the Hohle Fels cave in Germany. (H. Jensen/ AFP/ Getty Images)
By Patrick McGroarty Associated Press / May 14, 2009
Text size – +

BERLIN - A 35,000-year-old ivory carving of a woman found in a German cave was unveiled yesterday by archeologists who believe it is the oldest known sculpture of the human form.

Carbon dating suggests it was carved at least 35,000 years ago, according to the researchers' findings, being published today in the scientific journal Nature.

"It's the oldest known piece of figurative sculpture in the world," said Jill Cook, a curator of Paleolithic and Mesolithic material at the British Museum in London.

Stones in Israel and Africa almost twice as old are believed to have been collected by ancient humans because they resembled people but were not carved independently.

The Hohle Fels cave discovery suggests the humans, who are believed to have come to Europe around 40,000 years ago, had the intelligence to create symbols and think abstractly in a way that matches the modern human, Conard said.

"It's 100 percent sure, by the time we get to 40,000 years ago in Swabia, we're dealing with people like you and me," Conard told The Associated Press.