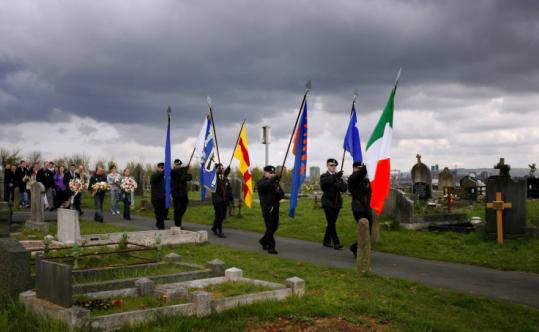 A statement from the outlawed Real IRA distributed to Irish media branded McGuinness a traitor because he holds the top Irish Catholic post in Northern Ireland's government, which shares power with British Protestants. It warned McGuinness, a former IRA commander, that "no traitor will escape justice regardless of time, rank or past actions. The republican movement has a long memory."

Supporters later read the statement at small rallies beside the graves of IRA dead in Belfast and Dublin.

McGuinness offered no response. He previously has appealed to the public to tell police about dissident IRA activities and says extremist threats won't deflect him from cooperating with Protestant past enemies.

The Real IRA also claimed responsibility yesterday for a long-disputed killing of a Sinn Fein official who was exposed in 2006 as a British spy. Denis Donaldson, Sinn Fein's former chief legislative official inside the power-sharing government, was shot to death four months after he confessed his duplicity at a Sinn Fein news conference.

An Irish weekly newspaper, the Sunday , published an interview with an unidentified Real IRA spokesman in which the official warned that the group intends to resume attacks in London.

The Real IRA last launched attacks in the British capital in 2000.

The Real IRA killed two unarmed British soldiers March 7 outside a Northern Ireland army base. They were the first killings of troops in the British territory since the IRA's 1997 cease-fire. Another splinter group, the Continuity IRA, killed a policeman March 9 in what was the first killing of a police officer since 1998, the year of Northern Ireland's Good Friday peace accord.

The dissidents oppose the IRA's 2005 decisions to renounce violence and disarm and remain committed to the belief Northern Ireland must be forced out of the Irish Republic. The Good Friday pact reinforced the right of Northern Ireland to remain in the United Kingdom as long as most of its residents prefer this.

Easter for decades has been a special holiday for Irish republicans, who don white lilies on their lapels as they honor the rebel dead of past generations.

The Republic of Ireland government and leaders of Sinn Fein, the major Catholic-backed party in Northern Ireland, also organized their own separate ceremonies yesterday to commemorate the Easter Rising, the 1916 insurrection in Dublin that inspired Ireland's later war of independence from Britain.