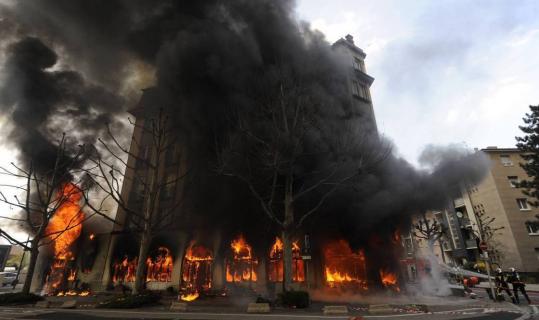 STRASBOURG, France - European leaders offered few extra troops yesterday for President Obama's intensified effort in Afghanistan, with most of the soldiers only on temporary security assignment, underlining deep divisions within the alliance over the war.

For a NATO summit meeting intended to be without drama, marking the 60th anniversary of the alliance, the event has been fractious both inside the hall and outside.

Thousands of protesters clashed with riot police during the session yesterday. And although officials finally came to an agreement on a new secretary general - the Danish prime minister, Anders Fogh Rasmussen, 56 - the deal was reached only after days of hard negotiations to overcome Turkey's opposition.

As expected, European allies agreed to provide up to 5,000 new troops for Afghanistan, the White House said yesterday. But 3,000 of them are temporary deployments to provide security for the August elections in Afghanistan. A further 1,400 to 2,000 soldiers will also be made available, to form embedded training teams for the Afghan Army and the police.

Obama is raising the number of US troops this year to about 68,000 from the current 38,000, which will significantly Americanize the war. But the new strategy, which the Europeans have pressed for, is aimed at creating larger and better-trained Afghan security forces that can defend and allow the West to leave. The new training forces are important, Obama emphasized in a news conference after the meeting.

European nations also promised about $100 million more to support the training mission, with $57 million to come from Germany.

Yesterday morning, NATO leaders walked across a sweeping bridge over the Rhine between Germany and France to symbolize Europe's unity, but later in the day, masked protesters were battling police officers from both countries on another bridge nearby, called the Bridge of Europe.

The protesters, who are a mix of antiglobalization and antimilitary activists, set a hotel and a border post on fire in Strasbourg, while the riot police used tear gas to keep them back.

Obama has been greeted warmly on a personal level, but his calls for a more lasting European troop increase for Afghanistan were politely brushed aside. And NATO leaders had struggled to choose their new secretary general, driving negotiations yesterday more than an hour past schedule.

NATO works by consensus, and the European-favored candidacy of Rasmussen was publicly opposed by Turkey, NATO's only Muslim country. The Turks said that Rasmussen was insensitive to Muslim concerns during the scandal over the Danish newspapers' publication in 2005 of cartoons of the Prophet Mohammed, and that because NATO was fighting in Muslim Afghanistan, the symbolism would be all wrong.

Rasmussen has also said he does not think Turkey will ever become a full member of the European Union.

Efforts to sway Turkish officials over the leaders' lavish dinner Friday at a casino in Baden-Baden, Germany, failed, as did a telephone call by Prime Minister Silvio Berlusconi of Italy to Turkey's prime minister, Recep Tayyip Erdogan. Berlusconi's effort yesterday morning also held up the other leaders as they waited to cross the bridge from Germany into France. Finally, Chancellor Angela Merkel of Germany set off with the others, leaving Berlusconi behind.

But behind closed doors, in an extended meeting that ran more than hour over, the deal was completed. According to senior European diplomats, Turkey was given at least two NATO jobs. Turkey was also promised that two blocked chapters of its accession agreement to join the European Union would move forward and that Rasmussen would publicly address the concerns of the Muslim world about his response on the cartoons.

Obama was said to be important to the Turkish decision to give in, meeting with President Abdullah Gul of Turkey and Rasmussen, who also spoke to the leaders over dinner Friday night and was said to have impressed Obama.

Rasmussen is a center-right politician who has provided strong support for the US war in Iraq and NATO's operation in Afghanistan and whose government has sent fighting troops there, as well as to Bosnia and Kosovo.

Yesterday's meeting began with niceties, with President Nicolas Sarkozy of France confirming his country's return to full membership in NATO, and with Obama welcoming Albania and Croatia to the alliance. Obama added that he expected Macedonia to join soon and that NATO's door remained open to other countries.

But he made no specific mention of Georgia and Ukraine, whose increasingly distant accession to NATO has contributed to a rift in Russia's relations with the West. At last year's NATO meeting in Romania, President George W. Bush pushed hard for membership accession for Georgia and Ukraine, but he was rebuffed by European leaders. Instead, NATO promised that both countries would eventually join NATO, but did not specify a timetable.

A few months later, the Russian Army occupied the Georgian regions of South Ossetia and Abkhazia, a move that most foreign analysts interpreted as a death knell for Georgia's NATO membership, because the European members of the alliance are loath to get into a fight with Russia.

While the United States has since then given lip service to continued support for NATO membership for Georgia and Ukraine, Obama administration officials have privately indicated that they do not plan to put accession for those two countries at the top of the American agenda.

"The door to membership will remain open for other countries that meet NATO's standards and can make a meaningful contribution to allied security," Obama said.

Sarkozy and Merkel, the hosts, praised Obama. "We are very pleased to work with him," Sarkozy said. "We trust him."

On his first overseas trip, Obama has been the star of the NATO meeting, with leaders jostling for time alone with him and photo opportunities with him and the local news media praising him for speaking in language that is both direct and substantive.