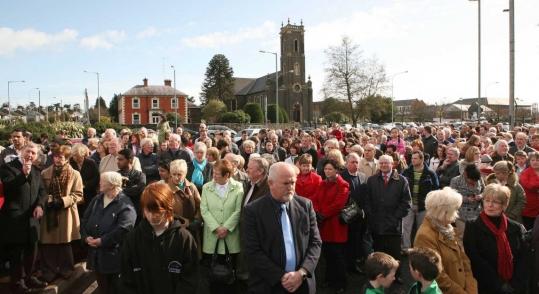 The leaders of the territory's Catholic-Protestant administration warned that Irish Republican Army dissidents were trying to tear apart their young coalition and drag Northern Ireland back toward its bloody past - but they said such tactics cannot be allowed to succeed.

The leaders postponed a US trip so they could deal with the crisis, but they expect to meet with President Obama on St. Patrick's Day as planned.

Police said two dissidents with assault rifles opened fire from a car Saturday night as four soldiers - who were just hours away from being deployed to Afghanistan - met two pizza deliverers at the entrance of the Massereene army barracks in Antrim, west of Belfast.

All four soldiers were wounded, two fatally. Also shot were the two delivery men, a local teenager who was seriously wounded, and a 32-year-old Polish immigrant who was in critical condition.

An Irish newspaper, the Sunday , said it received a claim of responsibility in a phone call from the Real IRA splinter group. The newspaper said the caller, who used a code word to verify that he was authorized to speak for the outlawed gang, defended the shooting and described the pizza deliverers as "collaborators of British rule in Ireland."

The Real IRA was responsible for the deadliest terror attack in Northern Ireland history: a 1998 car bombing of the town of Omagh that killed 29 people, mostly women and children.

The IRA killed nearly 1,800 people from 1970 to 1997 in a failed effort to force Northern Ireland out of the United Kingdom and into the Republic of Ireland. The IRA disarmed and renounced violence in 2005, but several splinter groups have tried to continue the campaign.

Both McGuinness and First Minister Peter Robinson, the Protestant leader of the 22-month-old coalition, vowed that the attack would not weaken power-sharing, the central accomplishment of the US-brokered Good Friday peace accord in 1998. They postponed a US trip, canceling meetings scheduled to start today with several American businesses operating in Northern Ireland. But they still expect to visit Obama at the White House on March 17.

Robinson urged Protestant extremists not to retaliate against the Catholic community. Two outlawed Protestant groups, the Ulster Defense Association and the Ulster Volunteer Force, claim to have renounced violence but have refused to disarm, reserving the right to seek revenge for dissident IRA acts.

"Can I urge all of those who may be angry within the [pro-British] unionist community - this is a matter to be left entirely with the police and the authorities," Robinson said.

Catholic and Protestant congregations in Antrim walked at midday from their churches to the scene of the killing.

Ministers from the Catholic, Anglican, Presbyterian, and Methodist churches took turns praying for the dead and wounded, for the IRA dissidents to give up, and for their leaders to stay on a path to reconciliation. The crowd reached several hundred.

In Washington, a spokesman for Obama condemned the attack. "Those who perpetrated these cowardly acts do not represent the will of the people of Northern Ireland, who have chosen a path of peace and reconciliation," said Mike Hammer, spokesman for the National Security Council.

On Saturday night, scores of Corps of Royal Engineers soldiers based at Massereene ordered pizzas - a final meal before boarding a flight to Afghanistan for a six-month tour. The four soldiers were already wearing their desert camouflage fatigues when they met the two delivery men.

Police Chief Superintendent Derek Williamson said all six were believed wounded during the initial volley of bullets, then the gunmen got out of their vehicle and shot their victims again as they lay on the ground.

Williamson said the two fatal victims were royal engineers in their early 20s but did not give their names. Their unit departed yesterday for Afghanistan after giving statements to police.