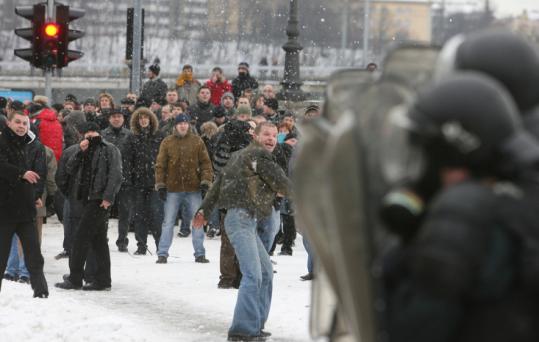 MOSCOW - Riots broke out again in the Baltic states yesterday, this time in the Lithuanian capital, Vilnius, where a group of 7,000 gathered to protest planned economic austerity measures. A smaller group began throwing eggs and stones through the windows of government buildings until the police moved in, using tear gas and rubber bullets to disperse it.

The episode was nearly identical to one on Tuesday in Latvia, when a peaceful protest of 10,000 people erupted into violence. And on Wednesday, a gathering of 2,000 in Sofia, the Bulgarian capital, began throwing stones and snowballs at the Parliament building, calling for the nation's leaders to resign.

In all three countries, years of steady economic growth have come to a jarring halt, and citizens are facing layoffs and cuts in wages. In each case, the authorities were left wondering whether they were facing organized activism or just impromptu anger.

Lithuania has been buoyed by foreign investment, a housing boom, and annual growth rates of about 8 percent. Economists predict a 5 percent drop in gross domestic product there next year, and the newly elected Parliament has announced tough austerity measures: workers in the public sector will see pay cuts of up to 15 percent, pensions will fall, and an array of taxes will rise.

Yesterday's demonstration was organized by trade unions, and about 1,500 people were present when violence broke out, a police spokesman said. More than 80 people were arrested and 15 injured.