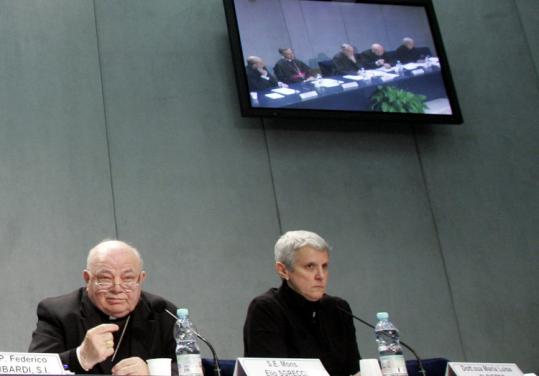 NEW YORK -The Vatican issued its most authoritative sweeping document on bioethical issues in more than 20 years yesterday, taking into account recent developments in biomedical technology and reinforcing the church's opposition to in vitro fertilization, human cloning, genetic testing on embryos before implantation, and embryonic stem cell research.

The Vatican says these techniques violate the principles that every human life - even an embryo - is sacred, and that babies should be conceived only through intercourse by married couples.

The 32-page instruction, titled "Dignitas Personae," or "The Dignity of the Person," was issued by the Congregation for the Doctrine of the Faith, the Vatican's doctrinal office, and carries the approval and the authority of Pope Benedict XVI.

Under discussion for six years, it is a moral response to bioethical questions that have been raised in the 21 years since instructions were last issued.

It bans the morning-after pill, the intrauterine device, and the pill RU-486, saying these can result in what amount to abortions.

The document does not prohibit the use of vaccines developed using "cell lines of illicit origin" if children's health is at stake. But it says that "everyone has the duty" to inform health care providers of personal objections to such vaccines.

The church also objects to freezing embryos, arguing that doing so exposes them to potential damage and manipulation, and raises the problem of what to do with frozen embryos that are not implanted. There are at least 400,000 of these in the United States alone.

"Our advice is that freezing should not take place," said Bishop Elio Sgreccia, president emeritus of the Pontifical Academy for Life. "Because once it is done, you're in a situation where to correct the error implies a further offense. Once you have them, what do you do with them?"

The Vatican's audience is not only individual Roman Catholics, but also non-Catholic doctors, scientists, medical researchers and legislators who might consider regulating stem cell research and other recent developments in biomedical technology.

In the United States, President-elect Barack Obama has said he would end the restrictions on federal financing of embryonic stem cell research that were instituted by President Bush.

Among the new developments treated in the document are the attempts by scientists to find alternative techniques for producing embryonic-like stem cells that could ultimately be used in medical treatments, without involving human embryos, said the Rev. Thomas Berg, executive director of the Westchester Institute for Ethics and the Human Person, a Catholic ethics institute in New York. He said that such techniques could "allow us to get past this cultural divide on stem cell research."

Berg said he was pleased to see that the Vatican document does not prohibit such techniques, although it cautions that there must be absolute assurance that human embryos are not destroyed in the process.

The document does little to clarify the Vatican's position on whether couples can "adopt" embryos that have been frozen and abandoned. Such "prenatal adoption," although rare, has been promoted by some Catholics and evangelical Christians. The document says that while "prenatal adoption" is "praiseworthy," it presents ethical problems similar to certain types of in vitro fertilization - in particular, surrogate motherhood, which the church prohibits.

Specialist said that there was little new in this document, but that it might still come as a surprise to many Catholics who were unaware of the church's ban on in-vitro fertilization.

Archbishop Luis Francisco Ladaria Ferrer, a Jesuit who is secretary of the doctrinal office, said that the document would probably "be accused of containing too many bans." But he said the church felt a duty "to give voice to those who have no voice."