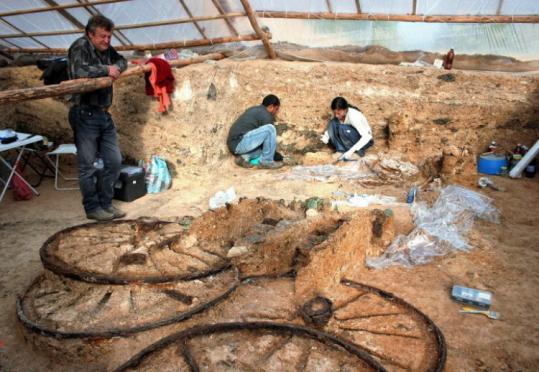 SOFIA, Bulgaria - Archeologists have unearthed an elaborately decorated 1,800-year-old chariot sheathed in bronze at an ancient Thracian tomb in southeastern Bulgaria, the head of the excavation said yesterday.

"The lavishly ornamented four-wheel chariot dates back to the end of the second century AD," Veselin Ignatov said by telephone from the site, near the village of Karanovo. But he said archeologists were struggling to keep up with looters, who often ransack ancient sites.

The bronze-plated wooden chariot is decorated with scenes from Thracian mythology. It has wheels four feet in diameter.

The chariot was found during excavations in a funerary mound. Archeologists believe it was the grave of a wealthy Thracian aristocrat because he was buried along with his belongings.

The team also unearthed well-preserved wooden and leather objects, some of which may have been horse harnesses.

In August, excavations at another ancient Thracian tomb in the same region revealed another four-wheel chariot. Previous excavations had unearthed only single parts of chariots - often because ancient sites had been looted.

The Thracians were an Indo-European nomadic people who settled in the central Balkans about 5,000 years ago. They were conquered by Rome in the 1st century, and assimilated by Slav peoples in the 6th century.