Dig trenches amid vow to pull back 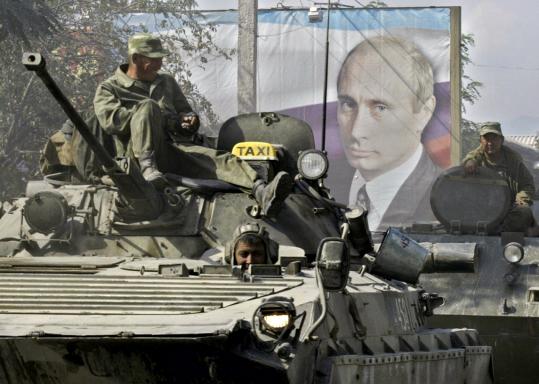 Georgian soldiers suggested the Russians were trying to provoke them and justify a resumption of the conflict, which over five days pounded the infrastructure of the small former Soviet republic and the morale of its troops.

In the Georgian capital of Tbilisi, President Mikhail Saakashvili said that Russia was thinning out its presence in some of the towns it occupies, but was seizing other strategic spots.

"What we're seeing now is a clear regrouping and also, again, some kind of deception campaign, saying, 'Look, we're moving out,' " Saakashvili said.

President Dmitry Medvedev of Russia has pledged his forces would retreat by tomorrow to South Ossetia, the breakaway Georgian province at the heart of the war, and a surrounding security cordon.

But there have been few signs of movement other than the departure of a small contingent of Russian soldiers from Gori, a strategically located city in central Georgia.

Yesterday, much of Georgia remained tense as Russian troops built a guard post on a hill outside Igoeti, about 30 miles from Tbilisi, and a large Russian convoy rolled near the western city of Senaki.

Russian soldiers also set up what appeared to be semi-permanent camps in at least three places in western Georgia near the Black Sea port of Poti, with dozens of men digging in by armored personnel carriers and trucks.

The warfare in a nation straining to escape Moscow's influence has sent tensions between Moscow and the West to some of their highest levels since the breakup of the Soviet Union in 1991.

Yesterday the United States and Poland formally signed a deal to place a US missile defense shield in Poland. In response, Russia's Foreign Ministry said, "In this case Russia will be forced to react, and not only through diplomatic protests."

South Ossetia is recognized internationally as part of Georgia, but Russia says the future of the province is up to provincial leaders, who almost certainly will issue more declarations of independence from Georgia.

In a sign that Russia plans to solidify control of South Ossetia, General Anatoly Nogovitsyn said Russia would build 18 checkpoints in the security cordon around the province, with 270 soldiers manning front-line posts.

The Parliament of another pro-Russia separatist region, Abkhazia, called on Russia yesterday to recognize its independence. Fighting had flared in both regions during five days before Georgia and Russia agreed to a cease-fire.

Western leaders have stressed that Georgia must retain its current borders. "South Ossetia and Abkhazia are part of Georgia," President Bush said yesterday.

In Gori, no Russian troops or heavy weaponry could be seen yesterday evening, including on the bridges and main access points. Earlier in the day Russian troops had been strictly limiting access to Gori to residents, turning away foreign journalists.

Shota Abramidze, a 73-year-old retired engineer, said Gori residents wanted the Russians out. "They've stolen everything. They've bombed everything. This is fascism, that's what this is."

Along the main highway from Gori to Tbilisi, Russian peacekeepers stopped cars and checked passengers' documents.

About 80,000 people displaced by the fighting are in more than 600 centers in and around Tbilisi. The United Nations estimates 158,000 people fled their homes in the last two weeks - some south to regions around Tbilisi, some north to Russia.

A convoy of flatbed trucks carrying food to one of the areas most heavily hit by the fighting was waved through a checkpoint by Russian soldiers yesterday.

The US State Department said Turkey was allowing three American military ships to pass from the Mediterranean to the Black Sea to deliver humanitarian relief to Georgia.

Two US senators, both supporters of presumptive Republican presidential nominee John McCain, were in Georgia for a show of solidarity, including a stop at a refugee center in Tbilisi.

"We can't let a bully do this, because if they do it here, they'll do it other places, and if we don't stop it here we'll have to stop it in a much more difficult way," said Senator Joe Lieberman of Connecticut.