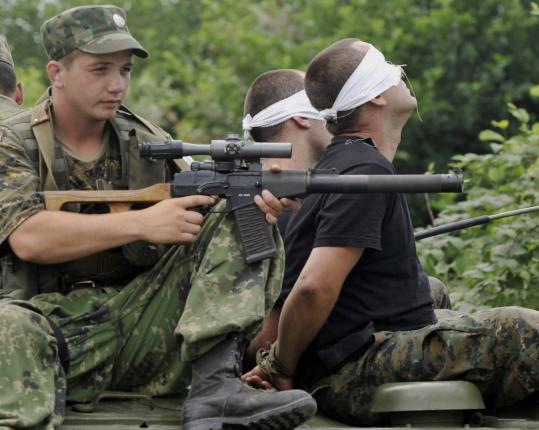 POTI, Georgia - Russia showed the first signs of drawing down at least some of its troops in Georgia yesterday, but in a pointed reminder of their continued grip on the country, its forces bound and blindfolded 21 Georgian soldiers at the Black Sea port of Poti, displaying them along with five seized American Humvees.

NATO says no "business as usual" with Russia. A4

Two days after President Dmitri A. Medvedev promised that the pullout would begin, signs of movement began. A platoon of armored infantry was seen moving away from Georgia through the narrow mountain passes on the Russian side of the border.

Near the city of Gori, the Russian and Georgian sides exchanged prisoners, including two Russian pilots who were shot down over South Ossetia.

Meanwhile, however, a Russian engineering platoon was reinforcing trenches for a checkpoint north of Gori, suggesting that Russian forces expect to be in Georgia for some time.

Russian armored vehicles held high ground overlooking Gori and Igoeti, and a network of checkpoints blocked the main highway. Moreover, some of the troops that on Monday had packed their equipment and said they were ready to leave had unpacked and moved back into checkpoints at the city's edge.

A large part of the conflict area and the region depopulated by civilians fleeing from the fighting remained lawless, and according to several residents in hiding in four villages, in need of water and food.

In Tkviavi, a Georgian village near the South Ossetian capital, Tshkinvali, the remaining Georgian residents were mostly in hiding, fearful of looters.

The most potent image of the day came from Poti, where Russians transported Georgian soldiers on top of armed personnel carriers after a three-hour blockade of the commercial port.

They drove the prisoners to their base in Senaki along with a caravan of seized American Humvees, which they then sent to Abkhazia, deep in Russian-held territory. A few hours later, a local priest in black Eastern Orthodox robes entered the base, hoping to negotiate the soldiers' release.

"They want everything - our bases, our ports, our roads," said Shalba Kuthava, a driver for the port, who waited outside the Russian-held base in the hope the men would be released. "We don't want that. We want to live separately and in peace and not to be attacked."

A top Russian military official said the Georgians had been detained at a checkpoint, armed and driving the Humvees, in violation of the six-point cease-fire agreement brokered last week by President Nicolas Sarkozy of France.

But the Georgians said that the soldiers were guarding the port against looters, and that the Humvees were US property that had been used in a joint exercise with Georgia earlier this year. They said the vehicles had been crated up and packed in a container, ready to be shipped back to the United States.

"We will not leave a single barrel, a single cartridge for Georgia which initiated this bloodshed," he said, in an interview with Interfax-AVN.

Nogovitsyn said that Russian troops would be pulled out from the rear, beginning with heavy combat equipment, and that movement out of Georgia would speed up on Friday. He said that the roads must first be cleared of abandoned Georgian tanks, which make rapid withdrawal impossible, and that permanent checkpoints must be built for Russian peacekeepers.

NATO allies meeting in emergency session in Belgium yesterday demanded that Russia fulfill its promise to withdraw its troops.

Giga Bokeria, Georgia's deputy minister of foreign affairs, said Russia was in violation of the cease-fire agreement, which dictated that peacekeepers withdraw to their prewar positions. "In fact, they have expanded their occupation," Bokeria said.

The new Russian checkpoints seemed to be in line with information the Russian Foreign Ministry released a day earlier, which clarified the scope of the pullback.

A 1999 document written up by the Joint Control Commission, an international body that monitored tensions in South Ossetia, gives peacekeepers access to a long stretch of land that extends about nine miles from perimeter of South Ossetia into Georgian territory, and right through Karaleti.

Medvedev has said Russian peacekeepers would pull back from other Georgian territory but remain inside the "security corridor." Sarkozy amended the cease-fire agreement to state that Russia could not occupy urban areas or block main roads.

Even so, this interpretation would grant Russian forces an unprecedented stronghold in central Georgia, said Sabine Freizer, who has monitored events in Georgia for the International Crisis Group, a nonprofit organization that seeks to prevent or resolve deadly conflicts.

Much is at stake in the definitions. The Joint Control Commission's security corridor includes a few hundred yards of the main east-west zone and railroad east of Gori.

The security corridor, however, would not cover a hugely valuable Georgian asset, the -operated pipeline that ships about a million per day of barrels of Caspian Basin oil to world markets, bypassing Russia.