At center of conflict, South Ossetians direct bitterness at Georgia 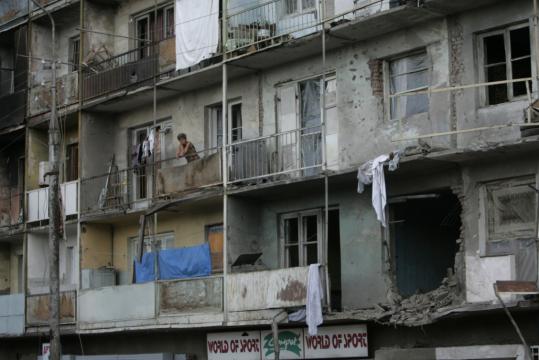 Many apartment buildings were damaged during fighting in Tskhinvali, in the Georgian breakaway province of South Ossetia. The conflict erupted on Aug. 7. (Sergei Grits/Associated press)
By Peter Finn Washington Post / August 18, 2008
Text size – +

TSKHINVALI, Georgia - The windows were blown out of the old synagogue here, and the wooden bimah splintered and partly collapsed. Shattered glass covered the floor, and parts of the ornately painted walls were torn off.

But the old building held, and it protected 40 people who took shelter in its spacious basement as the neighborhood above them was reduced to rubble.

"Three days we were here, without water, without bread," said Zemsira Tiblova, 60. "We had 14 children with us."

"Unforgivable," said her husband, Georgi Bestaev. "It was inhuman to bomb us."

The war between Georgia and Russia was centered on this South Ossetian town of about 10,000 people, and it cut a swath of destruction, severely damaging many homes and apartment buildings. Five-story blocks of apartments have gaping holes, with debris blown onto shattered balconies.

In one neighborhood, along Telman Street, house after crumpled house was a scorched shell. The area is about 200 yards from destroyed separatist government buildings in central Tskhinvali, an acknowledged target of Georgian forces.

A school, a library, and a kindergarten were blackened and pockmarked from small-arms fire. And the city was strewn with the ruined armor of both Georgian and Russian forces.

Here in Tskhinvali, residents have no doubt that Georgia started the war with Russia and there is much bitterness about the rain of artillery and rockets that the government of President Mikhail Saakashvili used in its efforts to capture the city.

The Georgian government said much of the destruction of Tskhinvali was caused by a Russian counteroffensive, but that argument carries no weight with residents.

People insist that a terrible barrage struck the city late Aug. 7 and continued into the morning - accounts supported by Western monitors who were also forced into their cellars. Even buildings used by the Organization for Security and Cooperation in Europe were damaged, one severely.

The scale of the destruction is undeniable; some streets summon iconic images of Stalingrad during World War II or Grozny, the capital of Chechnya, much of which was leveled in two wars between Russian and Chechen separatists.

But the number of dead remains in dispute. Mikhail Minsayev, the minister of interior in the separatist South Ossetian government, told reporters that as many as 2,100 people had been killed. As of yesterday, Tskhinvali Regional Hospital had confirmed the deaths of 40 people in the violence. Minsayev said people quickly buried the dead in their yards or took the bodies to North Ossetia in Russia for burial.

During the trip from the Georgian city of Gori and out to the Roki Tunnel that connects with Russia, the revenge taken by some of the inhabitants of South Ossetia was visible in the Georgian fields set on fire and the blackened, abandoned homes in Georgian villages north of Tskhinvali.

Two homes in those Georgian villages were ablaze Saturday.

A United Nations aid convoy entered Gori yesterday, the first time UN officials have reached the city since fighting started a week and a half ago. They said they found extensive signs of looting.

The headquarters of Russian peacekeepers in Tskhinvali was destroyed. .

The peacekeepers have been in South Ossetia since the early 1990s, when a cease-fire was declared after an earlier conflict. This province of Georgia has since had de facto independence from the central authorities in Tbilisi, the Georgian capital.

Georgian officials accused the Russian peacekeeping force of backing the South Ossetian separatists and failing to rein in their attacks on Georgian villages and territory in Georgia proper.

The war has poisoned people here against a future connection with Georgia though the province remains within Georgia's internationally recognized borders.

"Georgia is finished here; they are never coming back," Bestaev said. "We cannot live without Russia."