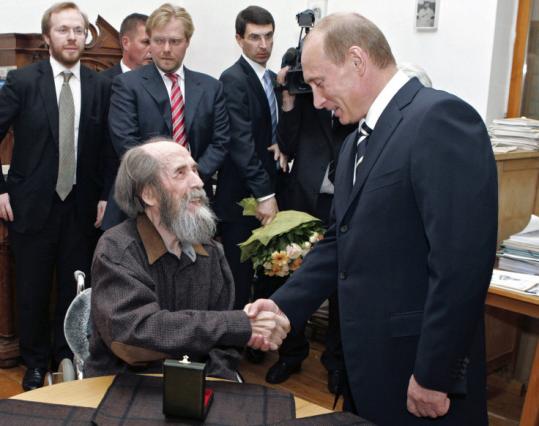 MOSCOW - In the last years of his long and stubbornly contrarian life, Alexander Solzhenitsyn finally found a political system he could embrace: Vladimir Putin's Russia.

"Putin inherited a ransacked and bewildered country, with a poor and demoralized people," Solzhenitsyn told the German magazine Der Spiegel in a 2007 interview, when Putin was still president. "And he started to do what was possible, a slow and gradual restoration. These efforts were not noticed, nor appreciated, immediately. In any case, one is hard-pressed to find examples in history when steps by one country to restore its strength were met favorably by other governments."

That Putin, a former KGB officer, should find an ardent champion among the most prominent victims of the agency he once served might seem bizarre. But Solzhenitsyn, who died Sunday at age 89, was always a very Russian puzzle: a brilliant curmudgeon, wrapped in heroism, inside a whopping ego. He was a man who exposed the murderous brutality of the Soviet Union but also lambasted what he saw as the spiritual vacuity of the West.

Solzhenitsyn had long signaled in his writing and speeches that the Russia of his dreams was no clone of Western-style democracy. It was instead a place apart from and suspicious of the West, acutely aware of its destiny as a great power and unique culture and steeped in the values of the Russian Orthodox Church and Slavic nationalism.

For the former dissident, who returned in 1994 after 20 years in exile to a country whose raw capitalism and marauding tycoons horrified him, Putin became the country's savior.

"We are proud that Alexander Solzhenitsyn was our compatriot and contemporary," said Putin in a statement released by his office. "We will remember him as a strong, courageous person with a great sense of dignity. His activities as a writer and public figure, his entire long, thorny life journey will remain for us a model of true devotion, selfless service to the people, motherland and the ideals of freedom, justice and humaneness."

President Dmitry Medvedev, Putin's successor, also mourned the writer, saying Solzhenitsyn "worked incessantly to form moral and spiritual ideals, seeing them as an extremely important foundation supporting the state and society, and fought for their triumph."

Solzhenitsyn wrote for eight hours Sunday, as he did most days, and retired to bed at 8:30 p.m., said Lyudmila Saraskina, one of Solzhenitsyn's biographers, who spoke to the writer's wife, Natalia. On Sunday night, he complained that he didn't feel well, and the family called an ambulance. Efforts to revive him failed, and he died at home as he had long wished, Saraskina said.

"Sunday night, he was very pale and couldn't breathe," she said in a telephone interview. "But he spent his last day wonderfully. He worked all day, writing at his desk. Recently he told me that now he only worked eight hours a day, when before he used to work for 16. He thought it was very little, seven or eight hours, and he complained about it."

Russians will be able to pay their last respects to Solzhenitsyn at the headquarters of the Russian Academy of Sciences today. He will be buried tomorrow at the Donskoy Monastery cemetery in Moscow, following a funeral in the monastery's cathedral, according to a statement by the Russian Orthodox Church.

"Severe trials befell Solzhenitsyn, as they did millions of other people in this country," the former Soviet leader Mikhail Gorbachev told the Russian news agency Interfax. "He was among the first to speak out about the brutality of Stalin's regime and about the people who experienced it but were not crushed. . . .

"To his last days he continued to work for Russia to get a worthy future, to become a truly free and democratic country, not just break away from the totalitarian past," Gorbachev said. "We owe him much."