Pirate feedings begin as city aims to starve out icons 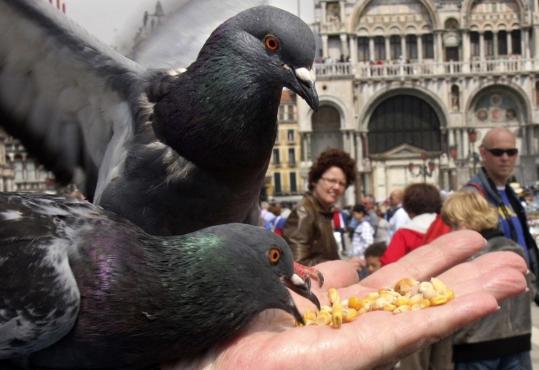 Tourists fed corn to pigeons in St. Mark's Square in Venice this spring. "Flying rats," in the view of the mayor. "Cool," in the view of many tourists. The city's anti-pigeon plan launched May 1. (Manuel Silvestri/Reuters/File)
Email|Print|Single Page| Text size – + By Tracy Wilkinson Los Angeles Times / June 8, 2008

VENICE - The pigeons are hungry.

They march single-mindedly, beaks thrust forward, across the stones of St. Mark's Square, dive-bombing at the first hint of a piece of bread or a chip. Soot-gray, with spindly coral-colored legs and claws, many just pace, pecking at stone in the hopes it will yield a crumb.

This fabled city's plan to starve away the pigeons seems to be working - unless Venetian pirates come to the rescue.

A band of animal lovers armed with skull-and-crossbones flags zips over the choppy Venice lagoon in speedboats. They dock at the palace-lined piazza, lug out 20-pound sacks of birdseed and scatter the food for all to eat.

The pirate pigeon-saviors have made three lightning raids into St. Mark's, the first two at the crack of dawn and now, at midday, to deliberately confront the police and their ban on feeding the birds.

So goes Venice's battle over its ever-multiplying pigeons. "Flying rats," in the view of the mayor - airborne menaces that poop all over precious, centuries-old marble statues. "Cool," in the view of many tourists - can you imagine a picture of St. Mark's without them?

Part One of the city's anti- pigeon plan, launched May 1, was to force the 19 licensed bird feed vendors to close their kiosks. Eventually, people trying to feed the birds will be fined, city officials say.

"The problem is the number," said Pierantonio Belcaro, Venice's chief environmental officer. By City Hall's calculation, Venice should accommodate, ideally, about 2,400 pigeons. Instead, he said, there are 60,000.

"Overfeeding is a problem because those that are ill and not strong live longer than they should," Belcaro said from his office overlooking the Grand Canal. "It is no longer a natural thing."

Plus, the ornate nooks and crannies of Venice's Byzantine, Gothic, and Renaissance towers and palazzos provide abundant places for pigeons to roost and reproduce.

The overpopulation of pigeons, the city says, damages art and architecture, costs millions in cleanup and repair, spreads disease, and draws endless complaints from hoteliers, restaurateurs, and other merchants who say their customers are being attacked.

Once the mighty center of a seafaring empire, Venice has fought off predators for centuries, from invading armies coveting its strategic location and ample wealth, to the rising ocean tides that are slowly engulfing its islands.

Modern times brought a new set of threats, including smog, water pollution, hordes of tourists, and the pigeons.

Officials argue that the pigeons' highly acidic guano seeps into fissures in thousands of marble monuments and building facades, weakening the structures. In addition, they scratch and peck at the marble, seeking its calcium content as a nutrient, doing further, costly damage.

Renata Codello, an official with the Italian Cultural Works Ministry, says the pigeons are destroying Venice's architectural heritage. The poop, she says, is a biohazard, igniting a chain reaction producing algae, spores, and fungus, while the birds are potential carriers of diseases and nasty bugs.

In a report last year, Codello recommended an "urgent" reduction in feeding.

Pigeon supporters dispute the official contentions, saying the steady erosion of monuments, mosaics, and architecture is a long-term problem that is caused at least as much by pollution and the onslaught of reckless visitors. And though some activists agree there are too many pigeons, they say the city must be more humane in thinning out the flocks.

"They treat the pigeons like they were demons," said Paolo Mocavero, head of the 100 Percent Animalisti organization that conducts the pirate feeding raids.

Even in the first weeks of the birdseed ban policy (pirate feedings aside), Belcaro said he already sees success in a notable decline in the number of birds congregating in St. Mark's Square.

Although there are slightly fewer of them, they seem to be getting a bit more aggressive.

Under the porticoes of Doges' Palace on a sun-filled late morning in May, one pigeon went after a woman with an apple. She bobbed and weaved to get away, screaming: "Let me go! Go away!"

Still, most of the waddling bevies of tourists seemed to delight in the pigeons. Americans, Russians, and Japanese played the stunt of stretching out arms, then squealing when birds alighted, as friends and family snapped photos.

"I like the pigeons," said tourist Hunter Latour, 18, from West Palm Beach, Fla. "It's part of the experience of coming to Venice and to St. Mark's, the attraction. Take that away and you lose something."