At stake in crisis: 1 billion hungry across globe 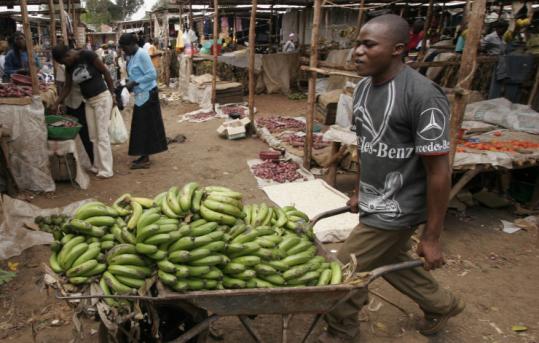 Among the keys to overcoming problems in food prices and scarcity would be increasing local production of crops in such African nations as Kenya, where a vendor transported bananas through a Nairobi market yesterday. (khalil senosi/associated press)
Email|Print|Single Page| Text size – + By Elisabeth Rosenthal and Andrew Martin International Herald Tribune / June 5, 2008

ROME - It was supposed to be an emergency conference on food shortages, climate change, and energy. At the opening ceremony Tuesday, the United Nations secretary general, Ban Ki-moon, noted that there were nearly one billion people short of food and called upon countries gathered here to act with "a sense of purpose and mission."

"Only by acting together, in partnership, can we overcome this crisis," he said.

But when the microphone was opened to the powerful politicians who had flown in from all over the world, they spoke mostly about economics and politics.

The US secretary of agriculture, Ed Schafer, talked about the benefits of biofuels and how genetically modified crops could ease world hunger. President Luiz Inácio Lula da Silva of Brazil spoke for half an hour about how Brazilian biofuels were superior to the US offerings. The president of Zimbabwe, Robert Mugabe, talked about how colonialism had created the food crisis. And President Mahmoud Ahmadinejad of Iran spoke of the need to inject religion into food politics.

Everyone complained about protectionism, though not their own.

Yesterday, food specialists as well as many representatives from poor countries wondered whether these divided forces could unite for a solution to a global conundrum: how to feed one billion hungry people.

"What is the common denominator here? It is a food crisis," said President Denis Sassou-Nguesso of the Republic of Congo. "That is the immediate problem for us."

At the three-day conference held by the UN Food and Agriculture Organization, there was a lot of argument about whether the high food prices were caused by the rush to biofuels, protective tariffs, the soaring price of oil, or the distortion of subsidies.

There has been much less talk about donors developing a new kind of aid program that most experts agree is needed: one that invests in developing agriculture in poor countries and that spends less to ship food halfway around the world to feed hungry people.

"The era of food aid is over; there is no more sending food from America to Africa," Kofi Annan, the former UN secretary general, said in an interview.

Annan was in Rome to discuss his latest project, the Alliance for a Green Revolution in Africa, a program with several UN agencies to assist African farmers in increasing their output. Donors, he said, need to do more to improve agricultural practice in Africa and Asia by providing tools, fertilizers, seeds, silos, and knowledge.

"Away from the cameras, I am starting to hear the right things," he said, noting that African agricultural productivity has dropped for the past two decades. "I'm hoping they will go home and adopt policies to ensure global food production, on the ground, in Africa, Africa and Asia. It's much more effective."

Indeed, officials from many major donor countries said they had been rethinking food aid policies, if only because food prices are now so high and transport is so expensive, with oil costing more than $120 a barrel.

Also, "there are no more surpluses" for food aid, since crops are also used for fuel, Annan said.

Henrietta Fore, head of the US Agency for International Development, said that transport costs were now soaking up 50 percent of the agency's food aid money and that rising prices of essential commodities such as oil were "eating away at our purchasing power."

In the past, the US program was heavily weighted toward sending food abroad and required that its aid be purchased in the United States and transported on American vessels.

"This crisis has made people think again," she said. "We have a new landscape for food and food needs."

Fore said that in a bill before Congress, 25 percent of food in a new $350 million aid package could be purchased overseas. But that has not been approved yet.

In the meantime, many representatives from less developed countries expressed frustration at the tenor of the meeting.

"We believe the problem is much more political than everything else," said Walter Poveda Ricaurte, the Ecuadorean agriculture minister. "We have to differentiate between the countries who are really affected by the food crisis and those who are seeing it as an economic opportunity."