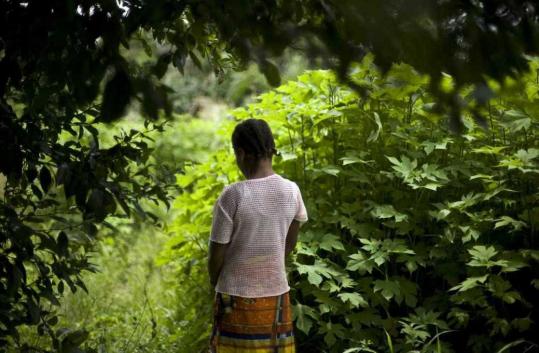 Save the Children UK released a photo of "Elizabeth," a 12-year-old who said she was raped by 10 peacekeepers in Ivory Coast last June, an example of the abuses listed in the report.
Email|Print|Single Page| Text size – + By Edith Lederer Associated Press / May 28, 2008

UNITED NATIONS - The British-based aid agency Save the Children UK said in a report released yesterday that it has uncovered evidence of widespread sexual abuse of children at the hands of peacekeepers and international aid workers in war zones and disaster areas.

UN Secretary General Ban Ki-moon, expressing "deep concern," said the United Nations will investigate the allegations that its peacekeepers are involved in the abuse.

The report, based on field research in southern Sudan, Ivory Coast, and Haiti, describes a litany of sexual crimes committed by peacekeepers and relief workers against children as young as 6.

It said some children were denied food aid unless they granted sexual favors; others were forced to have sex or to take part in child pornography; many more were subjected to improper touching or kissing.

"The report shows sexual abuse has been widely underreported because children are afraid to come forward," Jasmine Whitbread, chief executive of Save the Children UK, told Associated Press Television News. The report is entitled "No One to Turn To."

"A tiny proportion of peacekeepers and aid workers are abusing the children they were sent to protect. It ranges from sex for food to coerced sex. It's despicable."

Calling the sexual exploitation of minors a "very serious issue," Ban reiterated that he has a "zero tolerance" policy for such acts by UN personnel.

"I think that the report is very valuable and does give us some good points to which the United Nations should continue to address this issue," Ban said. "On all these cases which have been raised, we will very carefully investigate" and will take "necessary measures" where appropriate.

Earlier, UN spokeswoman Michele Montas had welcomed the report. "It's fair, and I think it's essentially accurate," she said.

Montas said the report states the UN has already undertaken steps designed to tackle the problem, from establishing conduct and discipline units in all UN missions to strengthening training for all categories of personnel. She said the UN needs to strengthen its investigative capacity.

The study was based on research, confidential interviews, and focus groups conducted last year. The charity emphasized it did not produce comprehensive statistics about the scale of abuse.

The report said that more than half the children interviewed knew of cases of sexual abuse and that in many instances children knew of 10 or more such incidents carried out by aid workers or peacekeepers.

The Save the Children UK researchers, who met with 129 girls and 121 boys between the ages of 10 and 17, and also with a number of adults, found an "overwhelming" majority of the people interviewed would never report a case of abuse and had never heard of a case being reported.

The threat of retaliation, and the stigma attached to sex abuse, were powerful deterrents to coming forward, the report said.

"Who would we tell?" said one Haitian boy interviewed for the report, explaining why victims of sexual abuse seldom report the crime. "We wouldn't tell the police because they are afraid of the peacekeepers. . . . Anyway, I've heard that the police do this."

Ann Buchanan, an Oxford University specialist in statistical attempts to quantify rates of child abuse, said the topic is so taboo it is virtually impossible to come up with reliable numbers. But she said the new report provides a useful starting point.

"This will never be a statistical study," she said. "We'd call it a pilot work exploring the start of an issue. All the research shows kids don't make it up."

Buchanan, who directs the Oxford Center for Research into Parenting and Children, said the biggest obstacle to accurate numerical studies of child sexual abuse is the reluctance of children to come forward and tell adults.

"Sexual abuse is a hugely difficult, sensitive area and it's not something that you can usually do surveys about because kids feel terrible shame and are afraid to say what's happened to them," she said. "Given what we know about underreporting of sex abuse, I would say this report is probably true. They've gone about it as sensitively as you can."

Save the Children spokesman Dominic Nutt said UN peacekeepers are involved in many abuse cases because they are present throughout the world in such large numbers. But he praised the UN for improving its reporting and investigative procedures regarding sex abuse.

"We're not singling out the UN. In some ways they do a good job. It's all peacekeepers and all aid workers, including Save the Children," that are involved in sexual abuses, he said.

The UN ordered the repatriation of more than 100 Sri Lankan peacekeepers from Haiti in November, after reports that they had sexually exploited local women and underage girls. Last summer, Moroccan peacekeepers in Ivory Coast came under investigation for sexually abusing local woman and minors.

The report says several Save the Children workers were fired for having sex with 17-year-old girls in violation of agency guidelines.

In its report, Save the Children UK makes three key recommendations: establish a way for people to report abuse locally, create an international watchdog agency this year to deal with the problem, and set up a program to deal with the underlying causes of child abuse.

Tom Cargill, Africa program manager at the London think tank Chatham House, said there is no "magic bullet" that can solve the problem quickly.

Material from the was used in this report.