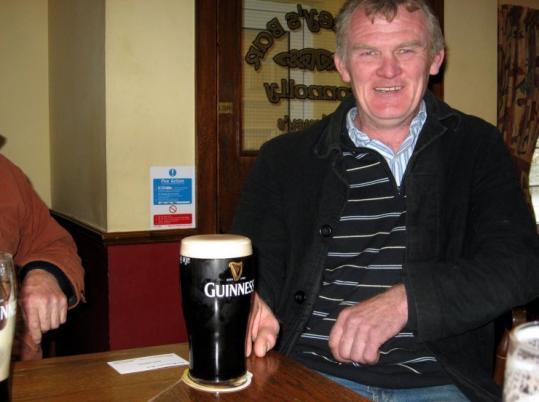 When Carney's pub closed, farmer Anthony Scanlan likened it to a sudden death in the family. Many rural Irish pubs have closed in the past three years as the country has prospered. (MARY JORDAN/WASHINGTON POST)
Email|Print|Single Page| Text size – + By Mary Jordan Washington Post / April 27, 2008

CONNOLLY, Ireland - For generations, Carney's, the only pub in this tiny village in western Ireland, had been the place to strike up a romance, celebrate a birth, or mourn a death - or just sip a pint of Guinness among friends near a warm fire on a damp day.

So when Carney's shut down last year after more than a century in business, Teresa Tuttle, 62, took it hard. "Where can we go after a funeral? After work? Where would we all meet?" she recalled thinking, shaking her head in her kitchen, not far from the pub.

The "closed" sign abruptly posted on Carney's door - and on the doors of 1,000 rural Irish pubs in the past three years - was another sign of the profound lifestyle changes that have accompanied the country's dizzying rise to affluence.

"It was like a sudden death in the family," said Anthony Scanlan, 51, a farmer who lives near Carney's. "Everything has changed in Ireland. It's as fast as New York around here."

As recently as the 1980s, young people had to leave Ireland to find work and millionaires were as rare as hen's teeth, as the Irish say. But by 2005, according to the , the country of 4 million people had 30,000 residents worth more than a million euros, or about $1.5 million. A year later, the number of millionaires had jumped another 10 percent.

Ireland's per-capita income is now among the highest in the world, surpassing those in the United States, Sweden, and Japan, according to the World Bank.

Wealth has given the Irish more options and less time - a bad combination for the local pub. More people are spending sunny weekends in Spain rather than evenings of "craic," as good times and conversation are known, down at the pub.

Fewer people are farming the valuable rolling green hills around Carney's, about 50 miles south of Galway, and more are commuting long distances to better-paying jobs. And all over the country, when the weary commuters return home, many now prefer to stay in their comfortable homes with a glass of chardonnay in front of their flat-screen TVs.

The Vintners' Federation of Ireland, which represents rural pubs, said the number of pubs outside Dublin has dropped from 6,000 to 5,000 in the past three years. Some estimates suggest the number may soon dwindle to 3,500.

Smoking bans in pubs and stricter drunken-driving laws have also played a role in the decline, said Michael O'Keefe, a spokesman for the Vintners group. He said some pub owners are serving lattes along with beer and whiskey in an attempt to cater to changing tastes. "Twenty years ago, if you asked a barman for a cappuccino, he would have looked at you as if you had two heads," O'Keefe said.

Some shrug off the closures, saying Ireland had too many pubs anyway. Many say they are delighted there are more fine restaurants and upscale coffee shops. But others, particularly older people, lament the decline of a touchstone, a place that linked neighbors, a seat near the fire where their fathers and grandfathers chatted.

"There is a certain sense of loss, of the coziness and companionship of the pub life," said Patricia O'Hara, a sociologist and policy manager with the Western Development Commission, which promotes economic and social development in western Ireland. She said some older people feel isolated and alienated in a faster-paced Ireland, where young people's lives seem to revolve around cellphones and social networking Internet sites such as Facebook.

"Be absolutely assured that people don't want to return to the days of poverty," O'Hara said. But, she added, "there is a questioning how much we are losing as result of prosperity . . . a nostalgia for simpler times when people had more time for each other."

Connolly sits at a bend in the road in the middle of County Clare, a little cluster of buildings set around a towering gray stone Catholic church.

For generations, village life has revolved around the church, the pub, and a small post office that collected mail, cashed checks and dished out news. But now all three of those institutions are under pressure.

After Carney's shut, Kennedy said, he sometimes drove to the pub in the next village, but it wasn't the same. At his own pub, he either knew everyone in the place, or soon did.

In November, Liam Moloney, a villager who had moved to London and runs a pub and a construction company there, bought Carney's, fixed it up, and reopened it.

"I'm not going to make any money to write home about," Moloney, 33, said from London. "But it was my local pub."