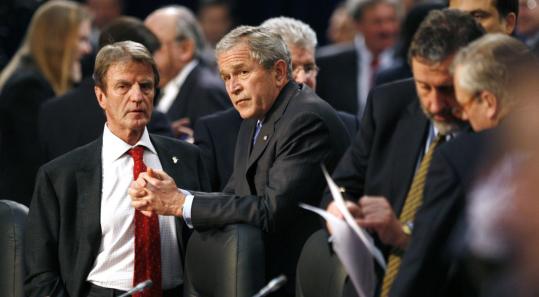 BUCHAREST - NATO leaders agreed yesterday to endorse a US missile defense system based in Europe and to provide more troops for Afghanistan, but they refused to back President Bush's proposal to bring Ukraine and Georgia closer to NATO membership.

Washington's failure to win over Germany, France, Italy, Spain, and other crucial European countries to its view on Ukraine and Georgia was considered by some countries of Central and Eastern Europe to have sent a message of alliance weakness to Moscow, a day before the Russian president, Vladimir V. Putin, makes his first visit to a NATO summit.

But Bush could claim success in persuading NATO to endorse his missile-defense plan in the face of Russian objections. Yesterday, an agreement was signed with the Czech Republic to build radar for the system.

"There has been, over 10 years, a real debate as to whether there is a ballistic missile threat," said Bush's national security adviser, Stephen J. Hadley. "And I think that debate ended today."

Putin has objected strongly to building parts of the missile defense system in former Soviet bloc states, despite Washington's assurances that the system is a response to threats from Iran, not from Russia. Putin, saying the system would fuel a new arms race, has even threatened to aim Russian missiles at the system, while also offering the use of a substitute system in Azerbaijan.

Konstantin Kosachev, chairman of the International Affairs Committee of the Russian parliament, said missile defense would be high on the agenda for the meeting between Bush and Putin in Sochi, a Russian resort, scheduled after the NATO conference, which Putin is to attend today.

Kosachev said Russia doubted Washington's motives. "We still do not have a proper explanation of this project," he said. "It is not about the number of interceptors; it's about undermining mutual confidence and trust."

The main contributor to more troops in Afghanistan was France. President Nicolas Sarkozy said Paris would send another battalion - about 700 troops - to eastern Afghanistan, freeing up more US soldiers to deploy in support of Canadian forces in the south, where the fighting against the Taliban is heaviest.

Sarkozy, in a joint news conference with the German chancellor, Angela Merkel, repeated that France intended to reintegrate fully into NATO once a separate European defense alliance became a reality.

"Let Europe's defense pole advance, and we will continue to advance toward NATO," he said. "I repeat, these are two things that go together, not one or the other."

Sarkozy praised Bush for comments "on the need for European defenses that would complement the alliance, which was, in my opinion, a historic turning point in US policy," Sarkozy said. "It was a gesture we have been waiting for, that has been noticed. It's a gesture that shows understanding for what is happening in Europe."

Bush traveled to Ukraine on the eve of the summit in Budapest and strongly endorsed its eventual membership. But the alliance decided not to offer Ukraine and Georgia entry into its Membership Action Plan, or MAP, a set of requirements and reforms necessary to achieve full alliance membership.

It was a remarkable rejection of US policy in an alliance normally dominated by Washington, and it sent a confusing signal to Russia, one that some countries considered close to appeasement of Moscow.

US officials focused on NATO's agreement that the alliance's foreign ministers would reconsider Ukraine and Georgia when they met again in December, before Bush left office, though few Europeans expected a different result. The Europeans suggested that invitations to the MAP program might come in a year, at the next summit, to be jointly held by Germany and France, or in 2010.

Hadley, the national security adviser, said most of the former Communist states that had joined NATO after the collapse of the Soviet Union had supported the US position. He and Secretary of State Condoleezza Rice emphasized NATO's final statement declaring that Georgia and Ukraine would become members someday, as would any other aspiring democracy in Europe.

German and British officials, who spoke on the condition of anonymity because they were not authorized to speak publicly, criticized the Bush administration for not coming to grips soon enough with the Ukraine and Georgia problem. They suggested that Bush's failure to try to work through the issue with Russia in advance created doubts among crucial allies such as Germany and France, which believed that Georgia's leadership was unstable and that Ukraine, with a divided population and a new government, was not yet ready to enter the MAP program.

Boris I. Tarasyuk, a former Ukrainian foreign minister and close ally of President Viktor A. Yushchenko on NATO membership, said in an interview: "Moscow will be very satisfied with the outcome. But I'd like to say to them that this is not the end of the story. Sooner or later it will happen."

Georgia's foreign minister, David Bakradze, said a "no" for Georgia would validate "those people in the Kremlin who think that by a policy of blackmail, by arrogance and aggression" they can influence NATO's decisions.