Protests counter the celebrations of independence

PRISTINA, Kosovo - In a move that inflamed tensions in this volatile region, the ethnic Albanian government of Kosovo yesterday proclaimed the province independent from Serbia, forming a new and very troubled country in Europe.

The United States, the biggest sponsor of independence for Kosovo, is expected to recognize the new state quickly, as will some European nations. But Russia is adamantly opposed, along with Serbia, and the United Nations is unlikely to voice support for Kosovo's unilateral action, setting up a thorny dispute reminiscent of the Cold War.

The declaration of independence was met by wild celebrations in Kosovo, violent protests in Serbia and a hastily called meeting of the UN Security Council, which failed to take any action.

The secession of Kosovo marks the latest and presumably final chapter in the blood-soaked dissolution of what was once Yugoslavia. Kosovo joins five former republics that, beginning in 1991 with Slovenia, have withdrawn from Belgrade's reign and become sovereign states, often through devastating warfare.

Here in the frigid, snow-dusted streets of Pristina, Kosovo's capital, jubilant ethnic Albanians celebrated. All day long and into the night, they marched shoulder to shoulder down Mother Teresa Boulevard, many wrapped in the red and black flags of neighboring Albania as fireworks exploded across the sky.

"This is a great day, the best day in our lives," gushed Elmi Berisha, 37, a real-estate broker.

"Happy Independence!" friends and acquaintances called out to one another amid hugs and kisses. Cars, their horns blaring, choked downtown Pristina, families danced, nationalist songs filled the air, and people partied in bars and restaurants offering free Independence Day food and drink. US flags were a common sight, while a few revelers fired guns in celebration. Others chanted the name of the guerrilla army that fought Serbs in the last decade to gain independence for the province, which is 90 percent ethnic Albanian.

In the Serbian capital of Belgrade, however, small but determined gangs attacked the US Embassy with chunks of concrete, torched garbage bins, trashed cars, and fought with police in frustrated anger over Kosovo's declaration.

Serbian riot police beat back attempts by demonstrators to invade Belgrade's only mosque, but two restaurants, the Slovenian Embassy (Slovenia holds the rotating presidency of the European Union) and offices of the only Serbian political party advocating recognition of a free Kosovo were ransacked.

Authorities said 12 people were arrested and B92 television reported 65 people, including at least 30 police, were injured; several bleeding police officers were seen being taken away.

The rioters may have been inspired by Serbia's prime minister, Vojislav Kostunica, who used a televised address to reiterate his country's fierce refusal to recognize Kosovo.

"Today . . . a false state of Kosovo was illegally declared on the part of Serbia that is under the military control of NATO," Kostunica said. "A destructive, cruel, and immoral policy carried out by the US led to this unprecedented act of lawlessness."

Earlier in the day, Kosovo's prime minister, Hashim Thaci, made official the proclamation that had long been anticipated: "We, the democratically elected leaders of our people," he said in a special session of parliament, "hereby declare Kosovo to be an independent and sovereign state."

Thaci made a point of reading a portion of his speech in the Serbian language and emphasized that the new Kosovo would respect the rights of its Serbian minority, many of whom have been harassed and fear for their well-being. The parliament also approved a new flag, a blue background with a yellow map of the Connecticut-sized province.

"We never lost faith in the dream," said Thaci, a former guerrilla leader, "that one day we would stand among the free nations of the world, and today we do."

Kosovo has been administered by the United Nations for nearly a decade, after NATO bombers drove out Serbian forces that were attacking ethnic Albanian separatists. An estimated 10,000 people were killed in that war in 1999, and many more displaced.

Retired US Army General Wesley K. Clark, who commanded NATO at the time, said in a television interview yesterday that the brutality of then Yugoslav leader Slobodan Milosevic's "ethnic cleansing" made it "inevitable" that Kosovo never again be ruled by Belgrade.

Most of Kosovo's nearly 2 million people are Muslims but are largely secular and pro-Western. Serbia is an Orthodox Christian nation with historic cultural ties to the Kosovo region, part of the reason it is so valued to Belgrade.

Beyond yesterday's jubilation among Kosovo's Albanians, and the Serb consternation, lies a problematic road ahead for the new state. Despite nine years of tutelage and billions of donated dollars, Kosovo is a long way from operating as a real country. The international community may wonder at some point what it hath wrought.

Kosovo has a very young and mostly unemployed population. Its treatment of women is deplorable, according to human rights activists - Kosovo is a major transit point and sometimes origin for the trafficking of women forced into prostitution. Poverty and official corruption are rampant and basic infrastructure is so poor that there are daily power outages. Minorities, including an estimated 100,000 Serbs, have been subjected to abuse and discrimination, and fewer than 10 percent of those forced from their homes in a wave of postwar revenge attacks by ethnic Albanians have returned.

Kosovo relies on a 16,000-member NATO force for basic security, has virtually no productive economy and instead lives by donations, and will continue, even in independence, to be supervised by a large EU contingent of police and judicial officers.

Moreover, the expectations of average Kosovo citizens that statehood will solve all their problems are widely seen as unrealistically high.

"It's going to be the shortest honeymoon you've ever seen," said analyst Shpend Ahmeti of Pristina's Institute for Strategic Studies. "They've linked every problem with status. And now, status will not be an excuse anymore."

Kosovo officials argue that because the status of their aspirant nation was in limbo, it was impossible to make long-term government plans. "I don't believe we are ready," said Berisha, the jubilant real-estate broker. "We will continue to need support. But they have to teach us to walk."

EU foreign ministers will meet Monday to decide what position to take on Kosovo's independence bid.

Although Washington is expected to recognize the new country of Kosovo, President Bush did not offer such acknowledgment yesterday. Traveling in Africa, he said resolving Kosovo's status was key to stability in the Balkans and urged all parties avoid violence. 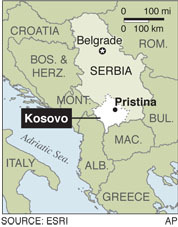