A rich market for Russian icons, and their counterfeiters 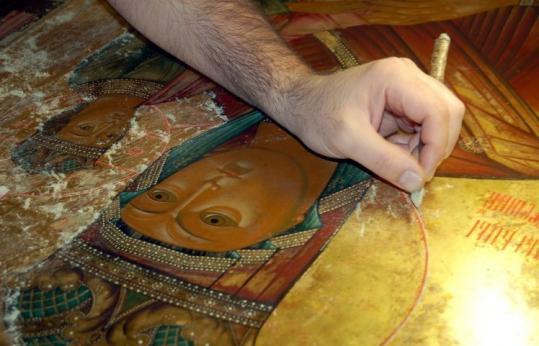 An icon was being restored recently at a Moscow gallery opened by a tycoon Mikhail Abramov. Russia's elite have gone on a spending spree to recover the nation's treasures. (PETER FINN/WASHINGTON POST)
Email|Print| Text size – + By Peter Finn Washington Post / February 17, 2008

MOSCOW - Last May, Maria Paphiti, an icons specialist at Christie's auction house in London, was invited to inspect religious paintings on wood that were among the contents of a building recently bought by an English family.

The artworks had been found wrapped in plastic, and the building's new owners wondered what, if anything, they were worth.

The answer: a lot, particularly if they drew the attention of Russian buyers who have embarked on a massive spending spree to recover the country's exiled treasures.

Paphiti quickly singled out one piece as quite valuable. The 1894 icon "St. Nicholas the Miracle Worker of Myra" had a rare signature by the acclaimed Russian icon painter Mikhail Dikarev. It had also been framed in gilt and enamel by Jakov Mischukov, a well-known Moscow craftsman.

Adding to the icon's value was a dedication on the back saying it had been presented to the last czar, Nicholas II, by the Old Believers community, which broke with the established Russian Orthodox Church in the 17th century over changes to the church's rites.

How the icon got to London, only to be discarded in an obscure building, remains a mystery, Paphiti said.

The icon was put on the block June 11. Bidding started slowly at 20,000 pounds, or almost $40,000 - the Christie's presale estimate. An impatient Russian bidder quickly stepped in with an offer of $200,000, and then two bidders, both unidentified Russians, faced off in bids made by intermediaries over the phone until the icon was sold to one of them for $854,000, a world record for an icon at auction.

For the happily bewildered English family, who told Christie's they wished to remain anonymous, it was an astonishing windfall. "They couldn't believe it," Paphiti said in a telephone interview from London.

The sale was new evidence that the market for Russian icons is skyrocketing. Fueled by religious patriotism and encouraged by both the Kremlin and the Russian Orthodox Church, Russia's tycoons are reclaiming masterpieces that were scattered worldwide by the chaos of the Russian Revolution, the flight into exile of those opposed to the Communists, and the illegal export of art, which continued into the 1990s.

Russians are spending hundreds of millions of dollars to reacquire all kinds of Russian art, not just icons. To help the process, the government has eliminated customs duties on the import of art. The market is so good that con artists are occasionally getting into the act with fakes.

In recent years, billionaire oils and metals tycoon Viktor Vekselberg acquired the 180-piece Forbes collection of Fabergé eggs for $100 million and put them on exhibit here. In September, the steel magnate Alisher Usmanov spent $40 million to buy the art collection of the late cellist and conductor Mstislav Rostropovich, then promptly turned it over to the state as a gift.

At Christie's, sales of icons and religious artifacts have jumped from $140,000 in 2005 to $14 million last year, and 70 percent of the buyers are Russian, according to Paphiti. Both Christie's and are reporting tens of millions of dollars in annual sales of Russian art.

"A patriotic wave has appeared in Russia," said Mikhail Elizavetin, 68, who made his fortune in construction and now has one of Russia's finest private collections of icons. "There is a pride in returning these icons to their motherland. I'm not talking about speculation in icons, I'm talking about real national pride. Many people have a sincere, pure reaction to this kind of art."

Four months ago, Elizavetin said in an interview, he paid a private collector in Switzerland nearly $1.5 million for a 14th-century icon called "Descent Into Hell." Six months ago in Berlin, he said, he acquired an entire private collection of 110 icons for what he described as "considerable millions."

The booming market has also spawned skilled counterfeiters who retouch primitive but old icons to make them seem like masterpieces. Complicating matters is the fact that some apparently ancient icons are forgeries made in the late 19th and early 20th centuries - a period when there was also a lively black market in counterfeiting. Distinguishing a 19th-century fake from a 14th-century original can be extraordinarily difficult, art experts say.

For some Russians, icons, particularly those that predate the early 17th century and are uninfluenced by Western motifs, are the truest form of Russian art. Icons made for the last czars and their families are also particularly valued. Their possession dovetails with a renewed sense of nationalism and religious identity among the elite of President Vladimir V. Putin's Russia.

Mikhail Abramov, also a construction magnate, said he experienced a religious awakening three years ago when he turned 40 and had made his fortune. He began to collect icons, first for his home. Two years ago, when he had acquired nearly 400 of them, Abramov opened a private museum, a common move by Russian tycoons these days

"I get a lot of offers, but I believe I don't have a right to sell them," Abramov said. "They belong to Russia."