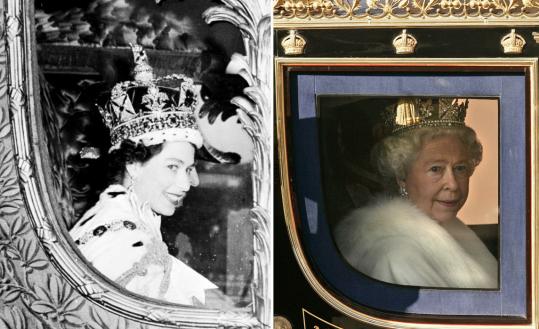 A combination of photographs shows Britain's Queen Elizabeth II in the royal carriage after she was crowned in June 1953 and last month after the State Opening of Parliament. (INP/SHAUN CURRY/AFP/Getty Images)
Email|Print| Text size – + By Jill Lawless Associated Press / December 21, 2007

LONDON - Queen Elizabeth II became Britain's oldest-ever monarch yesterday, reaching a new milestone in a job she has held for more than a half century - one that comes with luxurious accommodation, long hours, and little chance of retirement.

Elizabeth, 81, passed the mark set by her great-great-grandmother Queen Victoria. Her son, Prince Charles, closed in on the title of longest-waiting heir to the throne.

Victoria was born on May 24, 1819, and lived for 81 years and 243 days. Buckingham Palace, calculating longevity down to the hour, said Elizabeth moved past her predecessor at about 5 p.m. (noon EST).

Palace officials said there would be no special events to mark the occasion, and the queen had no public appearances scheduled yesterday. She spent the day working quietly at home on paperwork.

"She is a modest person, never one for blowing her own trumpet, and I think that is one of the reasons for her success and longevity," Lacey said.

Elizabeth, who took the throne in 1952, is one of only five kings or queens since the 1066 Norman Conquest to reign for more than half a century. Currently the fourth longest-reigning English monarch, she would overtake King Henry III on March 5 and King George III in 2012.

On Sept. 9, 2015, she would pass Queen Victoria, who ruled for almost 64 years, as the longest-reigning British monarch.

Elizabeth can already claim to have been active longer than Victoria, who retreated from public life for more than a decade after the death of her husband, Prince Albert, in 1861.

Lacey said the queen could take credit for steering the monarchy through choppy waters in the late 20th century, when public approval plummeted after the divorces of three of Elizabeth's four children and the death of Charles's former wife, Princess Diana.

"Ten years ago the monarchy was in a very parlous state," Lacey said. Its survival "is down to the steadiness of the queen."

The queen's landmark means her eldest son is approaching his own record - the longest wait by an heir to the throne. Victoria's son became King Edward VII in 1901, aged just over 59 years and two months. Prince Charles turned 59 five weeks ago on Nov. 14.

The antimonarchist group Republic urged the queen to mark the milestone by giving up her job. Spokesman Graham Smith said her retirement would allow Britain to debate reforming its constitution to create a new head of state.

"Elizabeth Windsor is now 81, well past the normal age for retirement," Smith said.

Buckingham Palace has long said that the queen has no intention of abdicating in favor of her son.