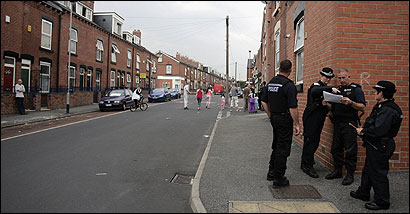 In city of immigrants, hidden pocket of militancy

LEEDS, England -- At least three of the men accused of carrying out the attacks on the London Underground last week came from this faded industrial town of brick row houses that once sheltered the hardy West Yorkshire working class and now house many immigrant families from Pakistan, Bangladesh, and other parts of the Muslim world.

The three suspects were British citizens of Pakistani descent, according to police officials and media reports, and one of them reportedly was as young as 19. The identity of the fourth suicide bomber, who may have blown up a double-decker bus, has not been confirmed.

Leeds and other cities and towns in Yorkshire and the Midlands have surging Muslim populations. The vast majority are hard-working, decent British subjects who have carved out a life here and who have maintained devout and lively Muslim congregations in the city's mosques. About 185 miles north of London, Leeds has a total population of 715,000 people, including an estimated 150,000 Muslims.

Many of them are longtime residents who arrived in Leeds as part of a pipeline of immigrants who have come from Pakistan, near the city of Lahore, to settle in the area. Travel agencies in the town boast cheap direct flights to Lahore and many of the restaurants, shops, and telephone calling centers along the main streets are owned by Pakistanis.

Sir Iqbal Sacranie, leader of the Muslim Council of Britain, cautioned against confusing this long-established community with a small pocket of militancy and hatred that appears to have taken root. Sacranie said the British Muslim community had received news of the suspects with ''anguish, shock, and horror."

''It appears our youth have been involved in last week's horrific bombings against innocent people," Sacranie said. ''While the police investigation continues we reiterate our absolute commitment and resolve to helping the police bring to justice all involved in this crime of mass murder. Nothing in Islam can ever justify the evil actions of the bombers."

The investigators were also exploring how a terrorist cell might have taken root in West Yorkshire. Some in the Muslim community have said recently that mosques have been infiltrated by extremist Islamic clerics inspired by Osama bin Laden's call for ''holy war" against the West.

M.J. Gohel of the London-based Asia Pacific Foundation, which has carried out threat assessments on terrorism in Europe for the British government and the United Nations, said that Britain's large Pakistani community has produced a trickle of suicide bombers who were radicalized in mosques in old industrial towns like Leeds and Luton.

He said a British citizen of Pakistani descent carried out a suicide bombing in Kashmir in December 2000. Two others were recruited by Islamic militants in the Gaza Strip and the West Bank and traveled to Israel, where one of them carried out a suicide attack at a seaside bar in Tel Aviv last year. The second was found dead nearby, apparently killed by his handlers after he failed to detonate the bomb.

Another British citizen with the same background was arrested in Gloucestershire, western England, last year and was prosecuted for a failed plot to carry out a suicide attack on an airline.

''It looks as if the Underground bombings, if indeed they were carried out by British nationals of Pakistani origin, does not come out of the blue," he said.

A controlled explosion was carried out at one location in Leeds, and last night large swaths of the city were cordoned off by police. Members of the community milled in the streets and expressed shock at the allegations that some of the attackers were from the city.

Humayun Fajjad, 26, a Muslim who was born in Leeds and works at a fish-and-chips shop, said: ''We feel terrorized. Nobody knows what is going on. All we see is cops everywhere."

Omar Salem, 22, a student who attends prayers at the Grand Central Mosque but was unable to attend services yesterday due to the police actions, said, ''We just hope it will not divide the community."

Even before investigators descended on Leeds, there already was some evidence of a backlash against the Muslim community in West Yorkshire. A spokeswoman for West Yorkshire police said authorities were investigating a fire at a mosque in Armley, near Leeds, early Friday, the day after the London bombings.

But Leeds has also been a place of extraordinary interfaith cooperation, with the Muslim community holding a unique prayer vigil in February 2004 inside an Anglican church to protest the war in Iraq.

Liebowitz reported from Leeds and Sennott from London.