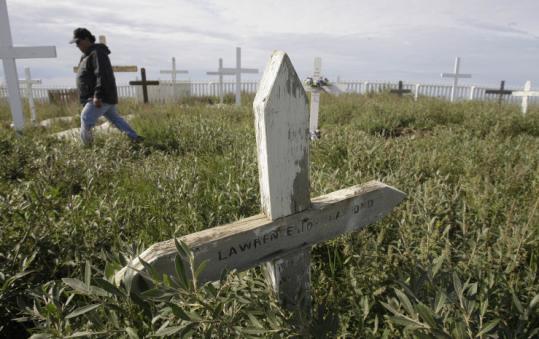 TUKTOYAKTUK, Northwest Territories - Caught between rising seas and land melting beneath their mukluk-shod feet, the villagers of Tuktoyaktuk are doing what anyone would do on this windy Arctic coastline. They’re building windmills.

That’s wind-power turbines, to be exact - a token first try at “getting rid of this fossil fuel we’re using,’’ said Mayor Merven Gruben.

It’s a token of irony, too: People little to blame, but feeling it most, are doing more to stop global warming than many of “you people in the south,’’ as Gruben calls the rest of us who fill the skies with greenhouse gases.

They’re feeling climate change not only in this lonely corner of northwest Canada, but also in a wide circle at the top of the world, stretching from Alaska through the Siberian tundra, into northern Scandinavia and Greenland, and on to Canada’s eastern Arctic islands, a circle of more than 300,000 indigenous people, including Gruben and the 800 other Inuvialuit, or Inuit, of the village they know as “Tuk.’’

Since 1970, temperatures have risen more than 4.5 degrees in much of the Arctic, much faster than the global average. People in Tuk say winters are less numbing, with briefer spells of minus-40 temperatures. They sense it in other ways, too, small and large.

“The mosquitoes got bigger,’’ the mayor’s aunt, Tootsie Lugt, 48, told a visitor to her house overlooking Tuk harbor.

Her father, one-time fur trapper Eddie Gruben, spoke of more outsize interlopers from the south. “Them killer whales, first time people seen them here in the harbor, three or four of them this summer,’’ said the 89-year-old patriarch of Tuk’s biggest family and biggest business, a contracting firm.

Plants and animals are a tip-off everywhere. In northeast Canada, the Nunatsiaq News advised readers the red-breasted birds they spotted this spring were American robins.

But the change runs deeper as well, undermining ways of life.

The later fall freeze-up, earlier spring break-up, and general weakening of sea ice make snowmobile travel more perilous. A trip to the next island can end in a fatal plunge through thin ice.

The unpredictable ice and weather combine with a changing animal world to make hunting and fishing more challenging, and to crimp the traditional diet of “niqituinnaq,’’ “real food’’ - of caribou, seal, and other meat staples.

The resilient Inuit - Eskimos - of the past simply moved on to better places. But since the mid-20th century these former nomads have been tied to settlements, with all the buildings, utilities, roads, and trouble that represents in a warming world.

At Tuk’s graveyard, for example, white crosses stand akilter where the permafrost has heaved and sunk below. “In another 20 years I’ll be burying my relatives again,’’ Gus Gruben, 45, the mayor’s brother, said sadly as he surveyed the graves of forebears.

The hamlet of Tuktoyaktuk grew up in the 20th century on a spit of gravelly land hooking out into the Arctic’s Beaufort Sea, at latitude 69 degrees north, 1,500 miles from the US border.

Much of the “land’’ is ice, great wedges of it stuck in the frozen soil of the permafrost. Rising temperatures mean thawing tundra, and that means sinking terrain, making Tuk even more vulnerable to the sea.

Merven Gruben believes it’s not too late for “people in the south’’ to stem the worst global warming, but it won’t help Tuk. “Eventually we have to move,’’ he said. “It’s a losing battle.’’