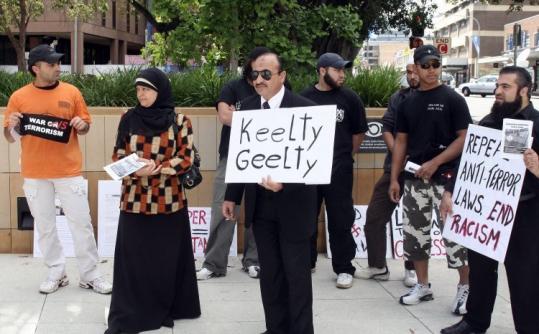 SYDNEY - Five men accused of plotting a terrorist attack went on trial yesterday with prosecutors alleging that the men were Islamic extremists who stockpiled weapons and explosive chemicals in a plan to wage "violent jihad" against non-Muslims.

After eight months of pretrial arguments and closed-door hearings, federal prosecutors began laying out their case against the five men, ages 24 to 43, before the New South Wales Supreme Court in western Sydney amid strict security.

Khaled Cheikho, Moustafa Cheikho, Mohamed Ali Elomar, Abdul Rakib Hasan, and Mohammed Omar Jamal were arrested in November 2005 and charged with conspiring to commit acts in preparation for a terrorist act, or acts. They have pleaded not guilty.

Prosecutor Richard Maidment told the jury that the men were Islamic radicals who had obtained or sought to obtain large quantities of household and industrial chemicals that could be used to make explosives, and had also stockpiled guns and ammunition in preparation for the alleged attack, which was intended partly as retaliation for Australia's support of the US-led wars in Iraq and Afghanistan.

Police raids on the men's homes had also uncovered a substantial cache of extremist material, Maidment said, including bomb making instructions, graphic videos of ritual beheadings and images of the hijacked planes smashing into the World Trade Center on Sept. 11, 2001. All the men had been living in Sydney at the time of their arrests, wire services reported. The men "possessed large quantities of literature which supported indiscriminate killing, mass murder, and martyrdom in pursuit of violent jihad, and which apparently sought to provide religious justification for conduct of that nature," Maidment said.

The men, who face possible life sentences if convicted, are accused of launching the conspiracy between July 2004 and their arrests in November 2005.

The judge warned the jurors not to prejudge the defendants because of their religion or appearance. "You must take prejudice and bias out of this trial altogether," the judge said.