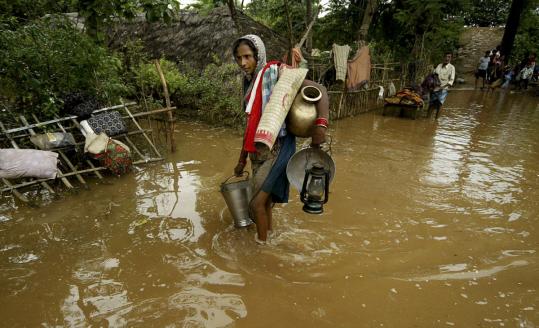 A woman waded through flood waters, making her way back to her village in Orissa’s Jajpur district, one of several areas in northern and eastern India hit by monsoon rains. (Biswaranjan Rout/Associated Press)
Associated Press / September 27, 2011

Those stranded took shelter atop trees, hills, and rooftops in the eastern states of Orissa and Bihar and the northern state of Uttar Pradesh. Rescue helicopters dropped food in hard-to-reach areas, while hundreds of boats ferried the stranded to safety.

But the rains, expected to continue for two more days, were holding up rescue efforts, officials said.

All 31 people killed over the weekend in Uttar Pradesh state died when the roofs of their mud houses collapsed, Relief Commissioner K.K. Sinha said. The state offered compensation of about $2,200 to victims’ families.

“Many of them died in their sleep,’’ said P.K. Upadhaya, a district magistrate in Jaunpur, where 18 of the deaths occurred. “Heavy rainfall hampered the rescue operation.’’

Another 17 people were swept away over the weekend by flood waters in Orissa state, where more than 130,000 have been evacuated from low-lying areas near rivers that burst their banks, Revenue and Disaster Management Minister S.N. Patra said. Since the monsoons began in August more than 70 people have died in Orissa.

The state’s chief minister widened the evacuation area this week, while the air force was ordered to send more aircraft to help.

Hundreds of thousands of people scrambled into trees or on top of buildings to escape the rising waters.

In Bihar state, soldiers rescued more than 200 people who were stranded when flood waters from the Sone River entered their village. At least 500,000 people have been affected as torrential rains and overflowing rivers inundated central and southern Bihar.