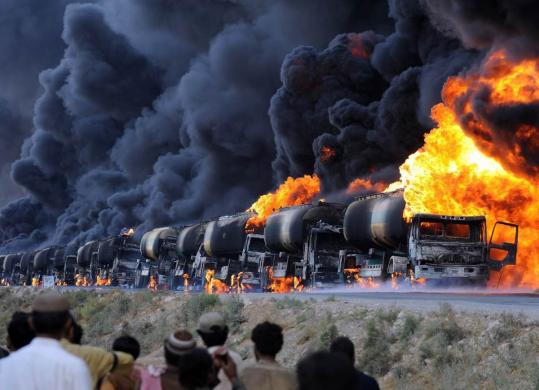 PESHAWAR, Pakistan - A suspected US missile strike killed four alleged insurgents yesterday in a militant stronghold near the Afghan border, and militant gunmen blew up at least 19 tanker trucks carrying fuel to coalition forces in Afghanistan.

Pakistani intelligence officials said a pair of missiles hit a vehicle close to Mir Ali town in North Waziristan. They spoke on condition of anonymity because they were not authorized to speak to the media on the record.

The area is home to militants from the Afghan and Pakistani Taliban and foreign Islamist fighters. Pakistan’s army has not launched an offensive in North Waziristan, meaning militants there have an effective safe haven. The United States routinely fires missiles at militant targets, drawing Pakistani government criticism.

In southwestern Pakistan, gunmen riding motorcycles set fire to oil tankers carrying fuel for US-led NATO forces in Afghanistan. The gunmen fired at the tankers as they were waiting for a police escort on the main highway at Kolpur village, outside Quetta, the capital of restive Baluchistan Province, police said.

At least 85 people have been killed in Karachi in the past week. The city has a long history of violence, with much of the fighting blamed on gangs allegedly linked to political parties.

The Muttahida Qaumi Movement, the city’s most powerful political party, said it will observe a general strike today to protest the violence and urged traders to shut down their businesses and transporters to take vehicles off the road.