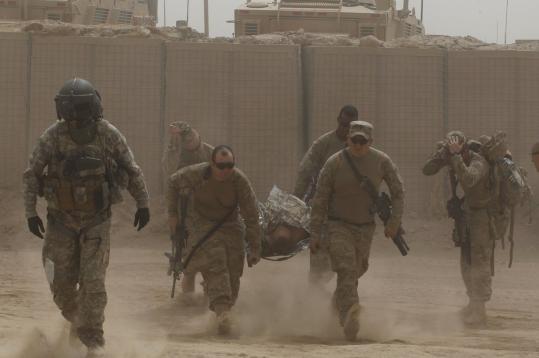 US Army soldiers evacuated a comrade who was injured by an improvised explosive device yesterday in Afghanistan. (Baz Ratner/ Reuters)
By Deb Riechmann Associated Press / July 5, 2011

KABUL - The outgoing commander of US and NATO forces in Afghanistan said the focus of the war will shift in upcoming months from Taliban strongholds in the south to the porous eastern border with Pakistan where Al Qaeda factions and others hold sway.

On his last Fourth of July in uniform before becoming CIA director, General David Petraeus said more special forces, intelligence, air power, and possibly some ground troops will be moved - probably by fall - to battle insurgents along the mostly rugged mountainous border with Pakistan.

The US-led coalition has focused much of its troop strength, resources, and attention on Taliban strongholds in southern Afghanistan, but the main effort of the war soon will turn eastward, he said. The east is home to the Afghan Taliban hotbeds and other groups such as Al Qaeda and Lashkar-e-Taiba.

“It’s a shift of intelligence assets. It’s a shift of armed and lift helicopters and perhaps the shift of some relatively small coalition forces on the ground and substantial Afghan forces on the ground,’’ he said. “The intent has always been that as the southwest and south are solidified, that these assets would focus on the east. It’s not to say that we’re not doing it now.’’

Separately yesterday, a missing British soldier was confirmed dead in an apparent insurgent attack in the south, hours after Prime Minister David Cameron arrived in the country to hail improved security and announce plans for the withdrawal of hundreds of his nation’s troops.

Britain’s defense ministry confirmed the soldier, who was reported missing early yesterday from a base in central Helmand, had been found shot to death after a huge search effort across the province. A spokesman for British troops in Helmand said the soldier had been discovered in the Nahr-e-Saraj district of Helmand. He said the soldier had suffered gunshot wounds, but that the exact cause of death is still to be established.

Earlier, a Taliban spokesman, Qari Yousef Ahmadi, said insurgents captured the soldier during a firefight with NATO troops in the Babaji area of Helmand and that he died in the crossfire. Ahmadi said that six other NATO troops died in the gunfight.

The Taliban claim could not be independently confirmed, and NATO said the coalition had no reports of a gun battle in Babaji yesterday.