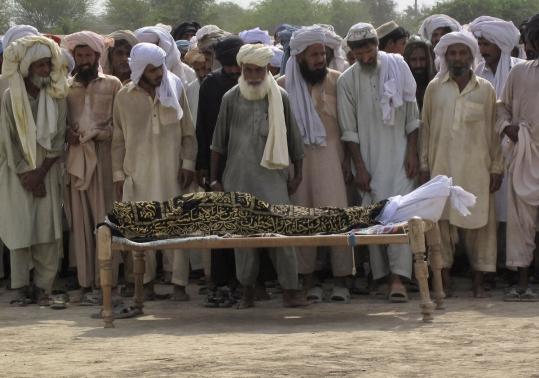 Ten people were killed in an attack by a husband and wife that led to a five-hour standoff on Saturday at a police station. (Mustansar Baloch/ Reuters)
Associated Press / June 27, 2011

DERA ISMAIL KHAN, Pakistan — The Pakistani Taliban said yesterday that the group had sent a husband and wife suicide squad to carry out an attack on a police station in northwestern Pakistan that killed 10 people, a rare instance of militants using a woman as a bomber.

The pair entered the police station in Kolachi on Saturday and said they were there to lodge a complaint, said Imtiaz Shah, a senior police official. Once inside, the two attacked with grenades and machine guns, triggering a five-hour standoff with police. Both attackers, including the woman wearing an all-covering robe known as a burqa, eventually blew themselves up. They killed eight police officers and two civilians, police said.

“This shows how much we hate Pakistani security institutions,’’ a Pakistani Taliban spokesman, Ahsanullah Ahsan, said by telephone.

Ahsan said it was the first time the militant group had used a female suicide bomber.