US may be going farther afield to reach militants 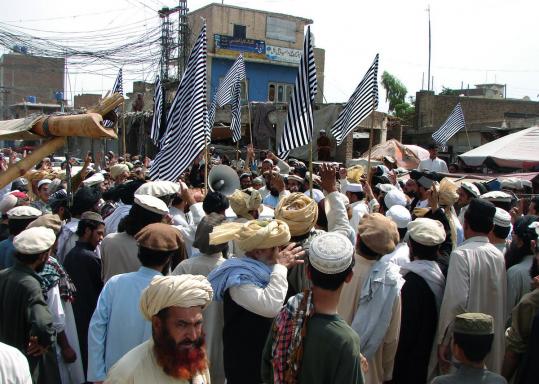 Pakistani tribesmen in Miran Shah in North Waziristan yesterday protested recent drone attacks in the region, which the US says is a sanctuary for the dangerous Haqqani network. (Thir Khan/ AFP/ Getty Images)
By Hussain Afzal Associated Press / June 21, 2011

PARACHINAR, Pakistan — Suspected US drones fired missiles at a vehicle and a house in northwest Pakistan, killing 12 people yesterday in a rare attack in an area where some of NATO’s fiercest enemies have reportedly traveled, Pakistani officials said.

Seven of the 12 people killed in the attacks were Afghan militants whose bodies were taken across the border to be buried, Alam said. The attacks were confirmed by two Pakistani intelligence officials, who spoke on condition of anonymity because they were not authorized to talk to reporters.

The Obama administration has dramatically stepped up covert CIA drone attacks against militants in Pakistan, but there have been only a handful of strikes by the missile-firing pilotless planes in the Kurram tribal area. Yesterday’s strikes could indicate an expansion of the program.

In a separate development, police said militants kidnapped a 9-year-old Pakistani girl on her way to school and forced her to wear a suicide bomb vest. Police said she managed to escape her captors as they directed her to attack a paramilitary checkpoint in northwest Pakistan.

Sohana Jawed, who is in third grade, said she was abducted near her home in the northwestern city of Peshawar on Saturday and taken to Lower Dir district, a four hours’ drive away, where she was found yesterday.

Most of the recent US drone strikes in Pakistan have taken place in North Waziristan, an important sanctuary for the Haqqani network, which American military officials have said is the most dangerous militant group battling foreign forces in Afghanistan.

The United States has repeatedly asked Pakistan to launch an offensive against the network in North Waziristan, but the military has said that its forces are stretched too thin by other operations in the tribal areas.

Local tribesmen said late last year that the Haqqani network cut a deal with Shi’ite Muslim militias in Kurram to allow the militants to cross through the area on their way to fighting in Afghanistan. The route would help them avoid the drone attacks that have rained down on North Waziristan.

Drone attacks have generated tension between Washington and Islamabad, and strains increased following the US raid that killed Osama bin Laden last month and humiliated the Pakistani government. Around 1,000 tribesmen held a protest against drone strikes yesterday in Miran Shah, one of the main towns in North Waziristan. The rally was organized by a pro-Taliban political party, Jamiat Ulema Islam.

The United States refuses to publicly acknowledge drone attacks in Pakistan, but officials have said privately that the strikes have killed senior Taliban and Al Qaeda commanders. Pakistani officials regularly criticize the drone strikes in public, but some are believed to support them in private depending on which militants they target.