Revised account asserts only one man shot at them 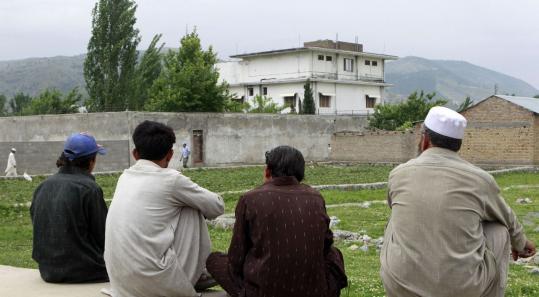 Accounts of the raid on the compound where Osama bin Laden was hiding, seen in the background, have been shifting this week. (Erik De Castro/Reuters)
By Robert Burns and Pauline Jelinek Associated Press / May 6, 2011

WASHINGTON — The Americans who raided Osama bin Laden’s lair met far less resistance than the Obama administration described in the immediate aftermath. The commandos encountered gunshots from only one man, whom they quickly killed, before sweeping the house and shooting others, who were unarmed, a senior defense official said in the latest account.

In yesterday’s revised telling, the Navy SEALs mounted a precision, floor-by-floor operation to find the Al Qaeda leader and his protectors, but without the prolonged, intense firefight officials had described for several days.

By any measure, the raid was fraught with risk, sensationally bold, and a historic success, killing a man who had been on the run for nearly a decade after his terrorist organization pulled off the devastating attacks of Sept. 11, 2001. Even so, in the administration’s haste to satisfy the world’s hunger for details and eagerness to make the most of the moment, officials told a tale tarnished by discrepancies and apparent exaggeration.

Whether that matters to most Americans, gratified if not joyful that bin Laden is dead, is an open question. House Speaker John Boehner, for one, shrugged off the backtracking to focus on the big picture: “I had a conversation with the president, and the president outlined to me the series of actions that occurred on Sunday evening. I have no doubt that Osama bin Laden is dead,’’ the Republican said.

The senior defense official spoke to the Associated Press anonymously because he was not authorized to speak on the record. He said the sole shooter in the Pakistan compound was killed in the early minutes of the commando operation, the latest of the details becoming clearer now that the Navy SEAL assault team has fully briefed officials.

As the raiders moved into the compound from helicopters, they were fired on by bin Laden’s courier, Abu Ahmed al-Kuwaiti, who was in the guesthouse, the official said. The SEALs returned fire, and the courier was killed, along with a woman with him. The official said she was hit in the crossfire.

The Americans were never fired on again as they encountered and killed a man on the first floor of the main building and then bin Laden’s son on a staircase, before arriving at bin Laden’s room, the official said, revising an account that the son was in the room with his father. Officials have said bin Laden was killed, shot in the chest and then the head, after he appeared to be lunging for a weapon.

White House, Defense Department, and CIA officials through the week have offered varying and foggy versions of the operation, though the dominant focus was on a firefight that officials said consumed most of the 40 minutes on the ground after midnight Monday in Pakistan, which was Sunday night in Washington.

“There were many other people who were armed . . . in the compound,’’ White House spokesman Jay Carney said Tuesday when asked whether bin Laden was armed. “There was a firefight.’’

“For most of the period there, there was a firefight,’’ a senior defense official told Pentagon reporters in a briefing Monday.

White House counterterrorism adviser John Brennan originally suggested bin Laden was among those who was armed.

“He was engaged in a firefight with those that entered the area of the house he was in,’’ Brennan said Monday, before the administration announced bin Laden actually was unarmed although there were weapons in his room.

Some of the inconsistencies in the US accounts seemed designed to score extra propaganda points. Brennan, for one, using information that turned out to be flawed, portrayed bin Laden as a man “living in an area that is far removed from the front, hiding behind women who were put in front of him as a shield.’’

Officials soon dropped the contention that bin Laden tried to hide behind women. They said what really happened is that bin Laden’s wife rushed the SEALs when they entered the room. They shot her in her calf.

The issue of who among the bin Laden group was armed can be a matter of interpretation. To a soldier — and particularly in the case of the SEALs confronting the world’s most wanted terrorist — an empty-handed person with a weapon nearby can be considered an armed threat.

The gaps and flaws, while striking, do not seem to approach the level of exaggeration and error in some other cases, such as the 2003 capture and eventual rescue of a female Army supply clerk in Iraq at the war’s outset. Initial military accounts of Jessica Lynch’s resistance to her captors were part of an effort to rally public support for the war, and were factually wrong.

It is taken as inevitable in military circles that initial reports of combat operations are almost always imperfect. Sometimes major details are wrong in the first telling, due either to misunderstandings or errors. As a result, the armed forces generally take the time necessary to double check key pieces of the story before making it public.

In the bin Laden case, the Pentagon was not the lead provider of information for an operation led by the CIA and followed in real time by the national security team and by Obama, who gave the order to proceed late last week. And the bin Laden killing stood head and shoulders above most other military operations in the demand for fast details.

In the Pentagon’s first on-the-record comment on the raid, defense policy chief Michele Flournoy said yesterday that the United States has no definitive evidence that Pakistan knew that the targeted compound was bin Laden’s hideout. Regardless, the Pakistanis must now show convincingly their commitment to defeating Al Qaeda, Flournoy said. Anything short of that will risk losing congressional support for continued US financial aid.