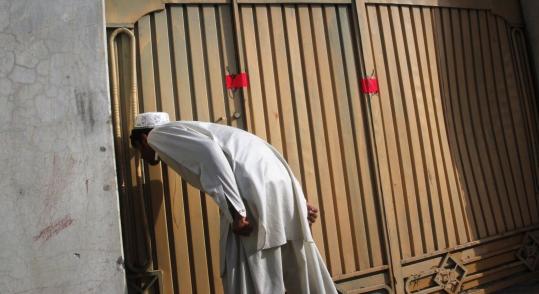 A resident peered into the compound in Abbotabad where Osama bin Laden was cornered and killed on Monday. (Faisal Mahmood/ Reuters)
By Carlotta Gall New York Times / May 5, 2011

ABBOTTABAD, Pakistan — The Pakistani military has taken charge of investigations into the circumstances that allowed Osama bin Laden to reside quietly in a three-story house on the edge of this town, officials here said. Military intelligence investigators returned to the house yesterday and spent most of the day working inside the compound, while the army and the police barred journalists and others from approaching the area.

The intelligence agencies have detained at least 11 people for questioning, including an immediate neighbor who once worked with the family, and the construction manager who built the house, Pakistani news organizations reported.

They have also taken into custody the bodies of four people killed when a US Navy SEAL team made an air assault on the house early Monday.

Three women and nine children found in the house after the raid are also in the custody of the intelligence services, Pakistani security officials said. At least two are related to bin Laden, one security official said: a 12- or 13-year-old daughter and his wife, who was shot in the leg but has received hospital care and is out of danger. He spoke on the condition of anonymity in accordance with the rules of his agency.

The national daily newspaper The News published a photograph on its front page that it said was the photo page of the passport of bin Laden’s wife. The passport was from the Republic of Yemen and pictured a woman in a black head scarf named Amal Ahmed Abdulfattah, born on March 29, 1987, making her 24 years old, about 30 years younger than bin Laden.

Asked about the validity of the passport, the security official said he could not confirm whether it was connected to anyone detained after the raid.

Officials are still investigating the identity of the four people whose bodies were found inside the compound after the SEAL team departed with bin Laden’s body. The bodies were of two brothers, a son of bin Laden, and a fourth, unknown man, the security official said. US officials have said the fourth person killed was a woman.

The two brothers were known as Arshad Khan, the owner of the house, and Tareq Khan. Neighbors say they were either brothers or cousins. Preliminary investigations have made officials suspect that the names were not their real names and that they were living under fake identities and bought the house under a false name.

Arshad Khan was carrying an old, noncomputerized Pakistani national identity card, which identified him as being from Khat Kuruna, a village in Tangi district, near Charsadda in northwestern Pakistan.

Pakistan introduced computerized identity cards a few years ago to cut down on the production of fraudulent identity cards, many of them bought by Afghan refugees, among others.

It remains unclear if Arshad Khan is the trusted courier who US officials say led them to bin Laden. The courier has been named Abu Ahmed al-Kuwaiti by US officials quoted in some news reports. They describe him as a Pakistani who was brought up in Kuwait, hence the suffix to his name, and say that he was a close protege of two senior figures in Al Qaeda, Khalid Sheikh Mohammed and Abu Faraj al-Libi, who were both arrested in Pakistani cities before being handed over to US custody.

The men and the compound do seem to have drawn the attention, on occasion, of intelligence agencies. Both Afghan and Pakistani officials have said they had pointed out the compound as one of interest to CIA officials in previous years.

Pakistan’s foreign secretary, Salman Bashir, told the BBC that officials had indicated it as suspicious in 2009, and as a possible hide-out for bin Laden, although there were “millions’’ of other suspect locations.

“The house that Osama bin Laden was killed in was pinpointed for the first time by Afghan intelligence,’’ the official told the news agency. The agency said the official declined to be named because of the sensitivity of the issue.

Afghan agents living in a onetime refugee camp in the nearby town of Haripur carried out surveillance of the house, he said.

He said that the Afghan intelligence information about the house “was shared with the Americans and they showed lots of interest,’’ but that Afghan spies had not been involved in the subsequent investigations or operation, the news agency reported.