Proposal aims for shutdown in 9 months 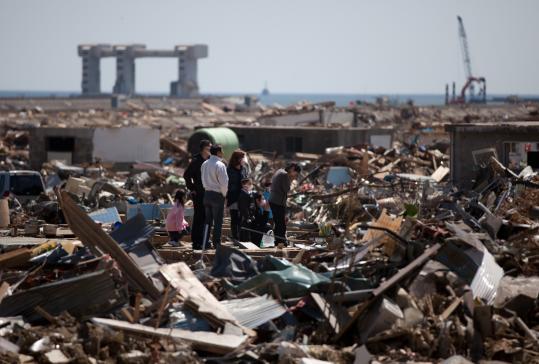 TOKYO — The Tokyo Electric Power Co. laid out an ambitious plan yesterday to bring the reactors at its hobbled Fukushima Daiichi nuclear power plant into a stable state known as cold shutdown within the next nine months and to try to reduce the levels of radioactive materials being released.

The goals are part of a two-part blueprint that represents Tokyo Electric’s most definitive timetable yet for controlling the reactors and improving safety conditions at the plant, which was damaged by the massive earthquake and tsunami six weeks ago.

The first part of the plan, expected to take three months, calls for building a new cooling system, critical to ensuring there are no further large-scale releases of radioactive materials. The company then hopes to cover three badly damaged reactor buildings and install filters to reduce contamination being released into the air.

At least on paper, the program represents a turning point in the company’s struggles to stabilize the reactors. For weeks, workers have been consumed with responding to a cascade of problems created not only by the original disasters but also by makeshift fixes.

By making its announcement yesterday, the company was trying to show that conditions had apparently calmed down in recent days and that it is now able to turn some of its attention to planning for the future.

The government said that evacuees who were forced to leave their homes near the Daiichi plant will be able to return in six to nine months, after the land is decontaminated. That seemed to suggest that no places would be put off limits, as they were after the 1986 Chernobyl disaster in Ukraine. But Japanese officials did not provide specifics about how contaminated the land is within several miles of the plant.

But the news means that the tens of thousands of people evacuated from the area and living in shelters will not soon be able to return to their homes, or to towns that were destroyed by the tsunami. It also means that the badly shaken government will have to continue to provide for the displaced people even as it struggles to rebuild from the quake and stabilize the economy.

“We will do our utmost to ensure that people who have been forced to evacuate will be able to return to their homes and the Japanese people can live without worry,’’ Tokyo Electric’s chairman, Tsunehisa Katsumata, said in a nationally televised news conference.

Two Japanese analysts said they thought Tokyo Electric’s plan could work, although one said the company should try for a cold shutdown sooner. In the nuclear industry, cold shutdown means that the temperature of the water in the reactor is below the boiling point. Boiling must be avoided because the fuel rods have to be kept under water to avoid meltdown.

The announcement that a new cooling system would be built appeared to be an admission that efforts to restart the old system had failed.

Hidehiko Nishiyama, deputy director general of the Nuclear and Industrial Safety Agency, said as much at a news conference late yesterday, announcing that “there is a possibility that normal cooling systems cannot be revived.’’

He added, however, that it is not yet possible to know for sure.

In a show of support, Secretary of State Hillary Rodham Clinton flew to Japan from Seoul, becoming the most senior American official to visit since the disaster. She told Japan’s foreign minister, Takeaki Matsumoto, that her visit reflected “our very strong bonds of friendship that go very deep into the hearts of our people.’’

Clinton said the United States is “doing everything we can to support Japan, and we have very good cooperation.’’ The US military has participated in rescue efforts in Japan, even after some personnel were exposed to radiation, and Americans quietly helped reopen a major regional airport. Clinton also met with Emperor Akihito and Empress Michiko at the Imperial Palace.

Since the cooling system at the plant failed, Tokyo Electric has been cooling the reactors and the pools that hold used fuel rods by pouring tons of water on them. But as the water boils in the reactors, pressure rises too high to pump in more water, so workers have to vent to the air and feed in more water.

That means the plant is consistently spewing radioactive materials into the air. And although much of the water that is used evaporates, tons of runoff have also been created.

Building a new cooling system would eliminate the runoff because it would be a closed loop, like the systems previously used at the plant. Such systems cool the steam that comes off the reactors, creating water that is pumped back into the reactors. The system would also stop venting, if it works correctly.

Until the new system is built, Tokyo Electric intends to set up a water processing unit that removes radioactive particles and salt, and store it in tanks, and place temporary covers over the reactor buildings and install air filters to help reduce the venting.